Lazarus like, 49 Bridge Street has risen from the Buildings at Risk Register and is set to enjoy a new life in its revamped Georgian finery.  Who could fail to admire the classical shop front incorporating Georgian pilasters with composite capitals, dating, it is said, from 1835?  Stand across from No.49 and raise your eyes to see an unusual architectural feature – the chimney stack on the building’s front wall.  This is a building that has given so much to Bridge Street.

No. 49 has been host to the hopes of many Banff businesses over its lifetime.  Some businesses resided here for a short period.  In 1903, Henry Barlow, Clothier, advertised that he would carry on his business at no. 49, while his shop on the Strait Path was being extended.  Later on, John Shand, boot factor, occupying this shop advertised that he had ‘much pleasure in intimating the fortunate purchase of a parcel of boots on such favourable terms that he is now advertising gentlemen’s glace Derby boots at the remarkably low price of ten shillings and sixpence per pair’.

Later on again, the shop became a hairdressing concern run by Mr Robert James Urquhart, a former piper in The Gordon Highlanders during World War 1, and a well-known businessman in the town.  Robert was born In Aberdeen, but spent most of his life in Banff.  He took over the hairdressing business from his father and carried it on all his life.  He died in 1952 aged seventy-three.

For many years it looked as if No. 49 would never recover, and without the intervention of the North East Scotland Preservation Trust, it never would have.  Thanks to their initiative this historic shop in this historic street will now provide accommodation for visitors and those attending courses at Banff’s silversmith’s workshop in the Smiddy. 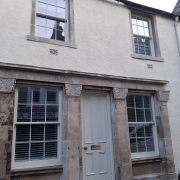