Admiral Gordon was perhaps the most distinguished of Banff’s half-pay officers. He was Rear-Admiral of the White, and commanded the fleet at the Nore. He came to Banff in 1750, and built his house in 1753 on part of the ruins of what had been Lord Banff’s ‘palace’ on Low Street. The house is now the Carmelite Hotel, ‘vernacular classical, with the charmingly modest proportions of that period’. He then fell out with the town council, because they built the Town Steeple next door in 1764. The Admiral was convinced of “the danger of the spire falling on the roof of my house”, and nothing the architect, Mr Adam, or the Council, could say would persuade him otherwise. The Preservation and Heritage Society still has the letters of cringing politeness from the Council.

The Admiral brought with him his private secretary, an officer on board his ship, Mr James Imlach, and under his auspices Mr Imlach set up the first bank in Banff. Until 1815 this was the only bank in Banff. Mr Imlach’s son wrote a useful history of Banff.

The Admiral died aged 64 in 1769, and is buried in the old kirkyard of Banff. His monument is a grand pyramid, with a fine inscription devised by Professor Beattie of Aberdeen.”Gentleness and elegance in manners, a friendly benevolent and tender heart, and a strict regard to every religious and social duty” and so on.  There is a famous painting of Professor Beattie by Sir Joshua Reynolds, showing him triumphing over unbelief (he wrote a book to refute David Hume). A few years ago the family renewed the inscription, but alas it is disappearing again. The lovely marble carving of weapons of war beneath is still clear.

The Admiral is best remembered, however, because of his daughter Margaret. Miss Admiral Gordon, as she was known, had a tune written in her honour in 1775 by William Marshall, the great fiddle composer to the Duke of Gordon at Fochabers. The tune, Miss Admiral Gordon’s Strathspey, is still danced to, but more important is the fact that Robert Burns loved it, and wrote words to it. “O a’ the airts the wind can blaw, I dearly lo’e the west, For there the bonnie lassie lives The lass that I lo’e best”, in honour of his bride-to-be, Jean Armour   A lovely song to a lovely tune, inspired by a Banff quine. 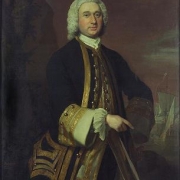 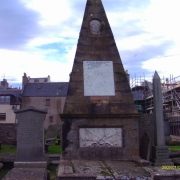 The Linen Trade in Banff
Scroll to top