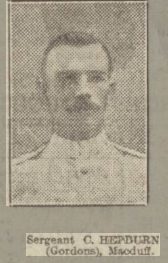 Charles Hepburn was born on 13th October 1886 at 2 Ross Street Macduff, the son of John Hepburn, a carter, and Margaret Jane Massie. In 1891 the family were living at 1a Ross Street and consisted of, parents John and Margaret Jane with five children including Charles. They were George, Jane, Henrietta, Alice and Hannah.

By 1901 Charles had left home and was working as a farm servant. This obviously didn’t suit him, and he joined the Gordon highlanders on 29th May 1906. We know from his enlistment papers that Charles was 5ft 7ins and weighed about eight and a half stone, after six months service, with three square meals a day Charles weighed in at ten stone. We also know that Charles had a fresh complexion blue eyes and fair hair.

In 1911 Charles is recorded as serving in the 2nd Battalion Gordon Highlanders and was in India. He worked his way up the ranks becoming a lance Sergeant in October 1914 and then promoted to Sergeant in February 1915.

The 2nd Battalion were in India from about 1902 to 1912 (from South Africa) then into Egypt stationed at Kase-el-Nil until 1914. In France they were part of the 7th Division at the 1st battle of Ypres.

Charles was wounded 18th June 1915 a gunshot wound in his left leg, a blast wound he was treated at the Military hospital in Etaples, and sent back to England to recuperate on 1st July 1915. He returned to the front on 14th March 1916.

Awarded the 1914 Star and Clasp also the British war medal and Victory Medal. The Clasp was only awarded to men who fought during 5th August 1914 to 22 November 1914.

Charles was killed at the Battle of Mametz which took place on 1st July 1916, when the British Army attacked the German 2nd Army on the Western Front, during the first day of the Battle of the Somme.

Charles was described by his commanding officer as a very good Non Commissioned officer, a 1st class disciplinarian and soldier.