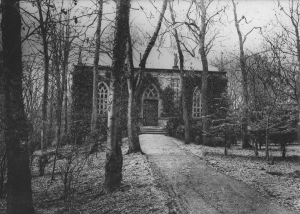 The Duff House Mausoleum has a number of unique features and several interesting stories. One of these features concerns what was an exciting new “invention” in the second half of the eighteenth century and revolutionised how detailed sculpture could be produced.

If you were in the market for a sculpture, you had to not only get a suitable sized piece of stone, but an expert with a hammer and chisel, wait a long time and pay a lot of money. William Duff, the 1st Earl Fife who had Duff House built could attest to that; he paid (after a court case!) a fortune to William Adam for the huge amount of carved stone on Duff House.

Since the 17th century a number of people had therefore tried to invent an “artificial stone”, but the lady accredited with developing this was Eleanor Coade, firstly Mrs Coade senior, and latterly her daughter. Although never married Eleanor the younger was always known as Mrs Coade – a practice that has caused some confusion to historians. A mixture of a carefully chosen type of clay, mixed with flint, ground glass and some grog, was used to create a mixture which Eleanor marketed as “Lithodypyra”. This is Greek for “stone fired twice” – in fact a firing process that lasted 4 days, which with coal fired kilns 250 years ago was a real achievement! The mixture was pushed into moulds, often by hand, about two to three inches thick; seeing fingerprints on the inside of Coade stone items gives a real connection over the centuries!

She made statuary for many rich and famous people, as one writer put it, a “whole Debrett’s full” of clients; one of these was James Duff, 2nd Earl Fife. The Duff House Mausoleum has a number of examples, some of which unfortunately have gone missing over the years. Then 8 pinnacles and 2 statues – Faith and Hope – that used to adorn the roof edge were all Coade stone; his parents finely detailed memorial inside is Coade stone, and the frieze around the outside. Next time you’re in Wrack Woods, have a look and note the series of “roses” at the top of the outside wall; they look really brand new – but are actually 227 years old, and put the condition of the surrounding stone to shame.

So Coade stone has two major advantages; it can be moulded, and it wears with time much better than “real” stone. Duff House is believed to be the most northerly example of this material. Unfortunately after Eleanor’s death in 1821 her cousin bankrupted the company; fortunately the recipe was “re-discovered” just a few years ago and is once again being made.