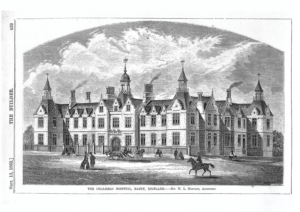 Chalmers Hospital was opened in Banff on the 19th of July 1864. This large Victorian building was built on bequest of Alexander Chalmers a merchant of Banff who on his death, left his entire estate (after the death of his wife) to the funding and building of a hospital for the people of Banff. Other funds were collected through local parish churches, but on opening only 3 parishes had contributed (Banff, Marnoch and Gamrie), and therefore residents of other area would be unable to send patients to the hospital.

The hospital has been described as a ‘Jacobean fantasy’ which conceals the ordered symmetry of its E-Plan with cupolas, gables and mullioned and transomed windows. A beautiful building to behold, it is built of dark whinstone, with contrasting sandstone ashlar dressings and margins.

There was no launch event as we are used to in modern times. Instead a meeting was held between some local notables and trustees of the hospital at noon on the 19th, and they declared it open.

The first patient was a 14 year old boy Alexander Mackintosh.

Chalmers Hospital was refurbished in 2012 and acts as a general hospital serving the Banffshire region.