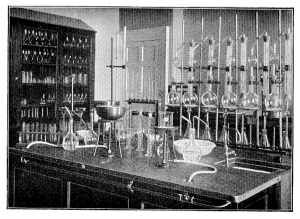 “Sanatorium” loosely means a “health resort”; typically defined as an institution that provides medical treatment and rest, often in a healthy climate, for people who have been ill for a long time. So what better place for a Sanatorium than Duff House in Banff. It opened in September 1913 and ran for 10 years; in fact it ran so successfully that it needed bigger premises and it moved to Ruthin Castle in Wales where it ran until 1935.

It’s own brochure declares it is the first of it’s kind in the United Kingdom “for the scientific treatment of disorders of metabolism”, and lists dyspepsia, ulcers, constipation, diabetes, obesity and emaciation, as complaints that patients should come to Duff House for treatment, as well as heart and arterial diseases. It was equipped with the very latest laboratory and other scientific equipment, as well as X-ray equipment and it had 54 bedrooms, some fitted with a private bathroom. At this time of course the East Wing was still standing (bombed 1940) and hence the House had more space than can presently be seen.

This was well before the NHS and as a private hospital fees were of course charged. In 1913 these were twelve guineas a week for the first four weeks, and then ten guineas (a “guinea” was equivalent to 21 shillings, £1.05 in modern currency). Extra could be paid for some of the “Special Suites”, the most expensive at 20 guineas a week being the Kings Suite (First floor, SW corner, now called the Prince of Wales bedroom). In 1916 prices rose by 20% “owing to the great increase in the cost of service, supplies and the scientific investigations made”. For reference the average wage in 1914 for a qualified shipwright was about 2 guineas a week, a labourer only about half that.

The Laboratory (as in the photo) was situated at the north end of the Long Gallery on the 3rd floor, with also an Operating Theatre, the Consulting and Examination Rooms, with the Waiting Room being where the model currently is. The X-Ray room was where the present Staff Room is.

Duff House became well known as a health resort and it’s Senior Physician was Edmund Spriggs who was instrumental in many medical studies. In particular he studied Diabetes, and the “Patients Manual of Diabetes” published in October 1922 as part of the “Duff House Papers” is the background to what is still the day to day treatment of Diabetes patients. 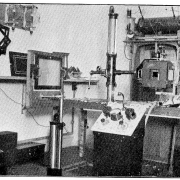