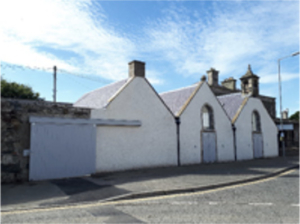 The Smiddy is situated on Old Market Place and is a Category B listed building. This building was formally a meal-house, which was used to store grain which could be distributed throughout the burgh during times of famine and hardship. Events such as the Black Death, wars of 1640 had an effect on the trade in Banff which resulted in the need for such a building. The meal-house was expanded in the 1790s. The doorways at ground level were the entrance to the meal-house whilst the round headed windows were the entrances to the lofts above. The bell tower was originally located on the grammar school. The building was converted into a smithy in 1902, for which it is better known and is still referred to as “The Smiddy” today.

Works began here in March 2017 to see the full renovation both internally and externally of the building, from a partially roofless structure to a purposefully designed silversmith workshop. For two centuries from 1680 Banff was home to a number of silversmiths who produced an array of spectacular items. The dedicated space will allow for a number of silversmiths to be able to work at one time and allow for the craft to be taught to others and to bring the trade back to Banff. This facility opened in September 2018.