The town of Banff has a unique character which is not found in any other town in Aberdeenshire or further afield. There are a number of features which show how the town has developed and how it has become the unique place it is today. Within the Banff Conservation Area there is a total of 234 Listed Buildings and structures, which includes 19 Category A Listed buildings, which is more than other conservation area in Aberdeenshire.

A settlement has existed in Banff from at least the 12th century AD and was an important location on the principle medieval route to Aberdeen to Inverness. Many streets survive which reflect the medieval street pattern of Banff, including High Shore, Water Path, Strait Path and Old Castle Gate. A wide variety of buildings survive in Banff ranging from the 16th-20th century reflecting both traditional styles to more grand formal styles.

In the 18th century Banff saw a revival at the time when industry and trade was increasing in the town. The Statistical Account of 1791-1799 describes extensive brewing industry, large scale thread and linen manufacture, considerable stocking industry, small scale soap and candle works, rope and sails works and brick and tiles works. There was also an increase in tradesmen including shoemakers and silversmiths. This increase in trade correlated with the development of the harbour in c.1775 and the completion in 1799 of the Banff Bridge. This saw the increase in Georgian townhouses built in the town.

Conservation Area Regeneration Schemes are an initiative run by Historic Environment Scotland in an attempt to regenerate towns across throughout Scotland who may have suffered from some form of deprivation in recent years. The Conservation Area Regeneration Scheme (CARS) in Banff commenced in 2014 and is to complete in March 2019. A grant of £500,000 was made by Historic Environment Scotland, with a further £115,000 contributed by Aberdeenshire Council. Together these funds has seen the conservation and restoration of properties in Bridge Street, Carmelite Street and Low Street in an effort to enhance and preserve the character and quality of their built heritage through the promotion of traditional materials.

Five projects were identified as Priority Projects – where considerable conservation works were required and a grant scheme was created to support smaller projects. 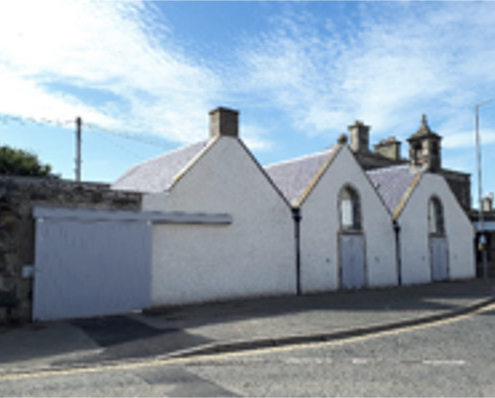