Walter Biggar and the herring industry 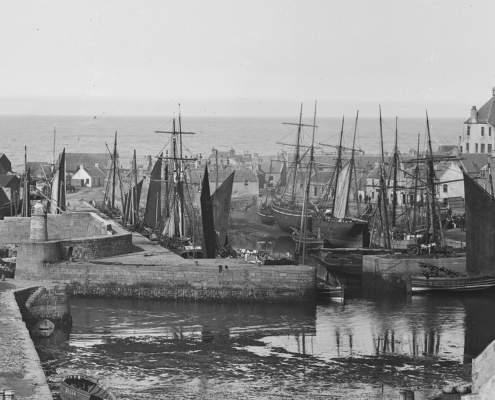 In the 19th and early 20th centuries Scotland’s herring fishing industry became the biggest in the world, and the towns of Banff and Macduff both played their part in that. The ornate fountain erected in Low Street in 1878 is a reminder of Walter Biggar, a pioneer of the Scottish herring trade. He was an Edinburgh merchant, born in 1787, who moved to Banff in 1821 and married local woman Anne Duff. Walter Biggar established the trading links on which the export of herring from the north-east of Scotland to the Baltic were built. The fountain was carved by John Rhind with the inscription ‘Presented to the Town of Banff in memory of Walter Biggar Esq. and Mrs Anne Duff, his wife, 1878.’

Fishing for herring was not new, but in the 19th century improved methods of preserving allowed large quantities to be quickly caught, cured, packed and exported, particularly to Germany, Eastern Europe and Russia. The fishing fleet followed the shoals of herring around the Scottish coast, and harbours were crammed with boats. As traditional sailboats were replaced by larger ‘steam drifters’, Banff Harbour was too small to accommodate the fleet and many of the boats moved to the deeper Macduff Harbour.

The work of gutting and packing the herring was carried out by women, known as ‘herring lassies’ or ‘gutting quines’. Local girls from Banff and Macduff followed the fishing fleet as far north as Shetland and as far south as Yarmouth.

The booming industry was interrupted by the First World War, and exports to Germany and Russia never recovered in the years that followed.