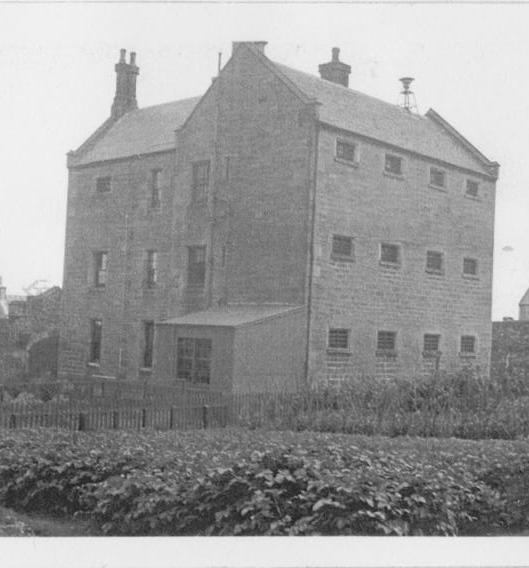 Australians come on pilgrimage to Banff to see where an ancestor was imprisoned before he was transported to what was then called Van Diemen’s Land. People could be transported for fairly petty crimes. There are cells at the back of the Town House on Low Street. On the opposite side of the road, at the foot of Strait Path, was its predecessor, the Tolbooth. The cells there were only too easy of access, and there was a long history of escapes. Indeed, even as late as the Town House, if a prisoner had funds or friends, or possibly even agility, there might be ways and means of getting out.

With the reign of Queen Victoria there came reforms, purpose-built jails it was almost impossible to escape from. Banff jail was on Reidhaven Street. As you can see in the picture it was a tall bleak building, set back behind an outer wall. We stopped transporting people to Australia, though there is a nice description of how two convicts were marched from the new jail down George Street and Sheriff’s Brae to the harbour, on their way to the convict ship from the Thames, and the town turned out to see them off, in a sympathetic spirit.

Banff was a county town, but not really a big enough place to justify a proper jail. It was used as an overspill for neighbouring counties, and in 1878 stopped having long-term prisoners, who went to Elgin instead. The building was used as the local lock-up, like the cells at the police station. In the days when they still had the birch, that was where it was administered. We understand that the chief warden, Mr Coutts, hated that side of his work.

The jail was closed in the 1950s, and then demolished. Part of the outer walls was incorporated into the group of houses that replaced it, called Turnkeys as a nod to the past. In the Banff Museum you can see the big lock and key of the jail. There are still cells if needed in Banff, as the Police Station is a former bank, a grand Victorian building on Low Shore, and the former bank vaults make thoroughly authentic-looking cells.

The Former Tollbooth Hotel was one of the five buildings identified as a priority project.