In 1759 General James Abercromby (aka Mrs Nanny Cromby) retired from the army and returned to his Banffshire estate, Glasshaugh.  With plenty of time on his hands he commissioned the rebuilding of Glasshaugh House in a classical style, see above.

Fast forward to the 21st century.  The house still exists but in a ruinous state.  Not surprising since in the last century it was used to house livestock, ‘chickens on the second floor, pigs on the first – who reached their pens via the principal staircase – and cows on the ground’.

Back in the 18th century, James’ thoughts turned to land improvements on his estate.  But what to do?

So, a windmill it was.  While windmills were not unknown in Scotland, most mills in the area were water driven.  In construction, two essential components required are labour and materials.  Fortunately, labour was readily available in the form of large numbers of tenant farmers and cottars locally displaced in a manner reminiscent of the Highland Clearances.  Materials were available in the form of a nearby Bronze Age burial cairn.

To the utter astonishment of the local population around Banff a gigantic four-story windmill was completed and dressed in splendid white sails.  It was the talk of Banff and beyond.  It still is, but now known locally as the Cup and Saucer.  Not surprisingly travellers who pass it on the A98 between Banff and Portsoy have no idea what it is.  Could it be a Martello tower, Pictish broch, a tower house, a part of the nearby Glenglasshaugh Distillery??

James Abercromby, defeated general, nanny, wind power visionary, destroyer of Bronze Age remains? We will let his wife, Mary Duff, have the last word. She ended the inscription on his gravestone at Fordyce:“… his once happy wife inscribes this marble as an unequal testimony of his worth, and of her affection.” 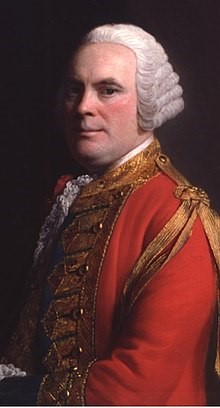 James Abercromby (1706 – 23 April 1781) started his military career at the age of 11 by entering the 25th Foot as an ensign.  It is a truth universally acknowledged, that significant promotion in the military, must await a war.  In 1734, not yet a captain, he sought and won promotion as Banff member of parliament courtesy of his brother-in-law, William Duff – Duff’s son was underage.  Abercromby had to give up his seat in 1754 when the son came of age.

Abercromby’s big military moment, and it was just a moment, came in December 1757 with the outbreak of the Seven Years’ War.  He was made Commander-in-Chief of British forces in America and directed to take what is now called Fort Ticonderoga from the French. He managed to assemble a force of 15000 and move them and their supplies through the wilderness. That said, the troops eventually lost their way in the dense forest and soon after, Lord Howe, Abercromby’s right hand man, was killed during a brief skirmish with the French.

At Fort Ticonderoga the French commander, Montcalm, was hastily entrenching his force of some 3,500 men behind a barricade of brush and abatis (sharpened wooden stakes stuck in the ground, pointing at advancing troops).  Fearing French reinforcements and lacking Lord Howe’s advice, Abercromby vacillated, but eventually ordered a series of frontal assaults without waiting for artillery support.  Bad move; the strategy was a disaster leaving 1,944 British troops dead or wounded and Montcalm in situ. Abercromby then ordered a retreat. Second bad move; his forces still vastly outnumbered Montcalm’s, and by bringing up his artillery, he could have won the day.  However, Abercromby was disheartened by his heavy losses and pulled back to his fortified camp south of Lake George.

Worse was to come. James was mocked as Mrs Nanny Cromby, a name that referenced his organizational skills and his indecisive leadership.  In September 1758 he was sent home and replaced by General Jeffery Amherst. 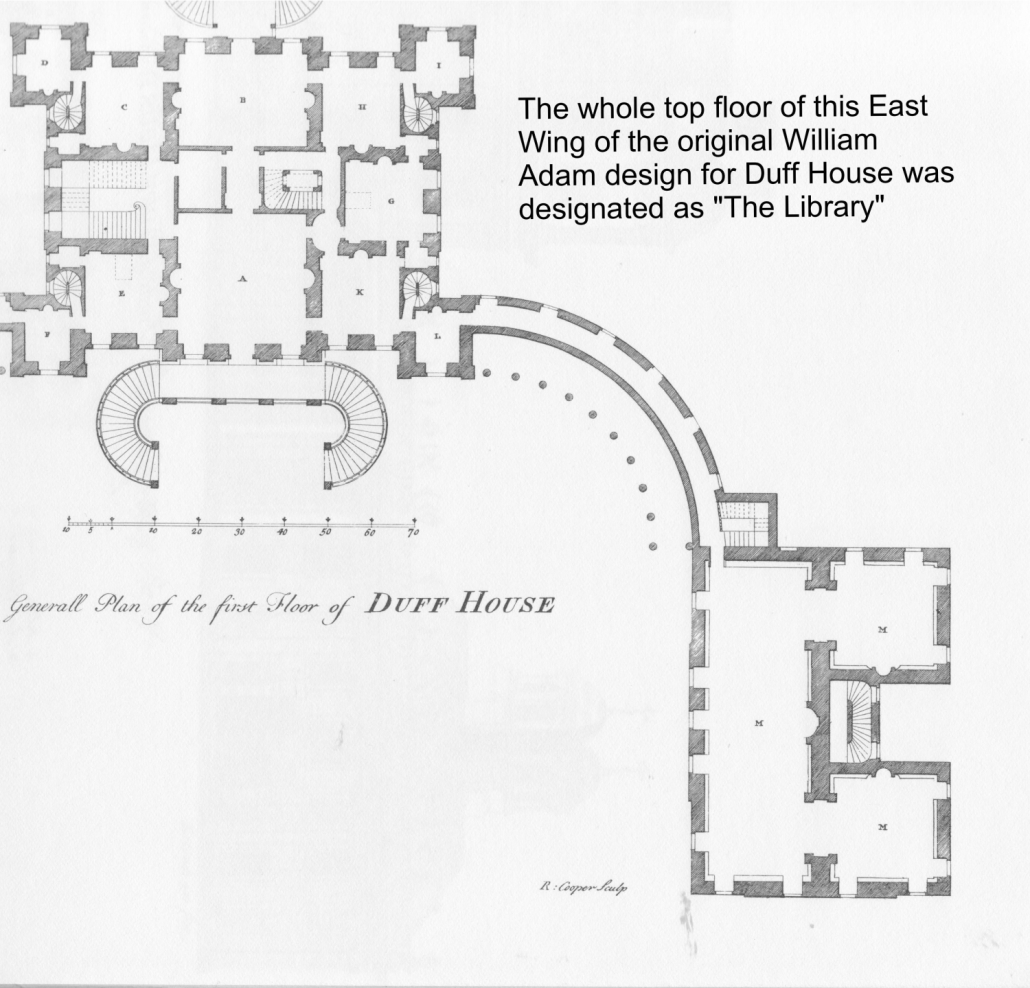 There are at least two meanings of the word “Library”.  The first meaning is a room where books are kept.  At Duff House there were very grand plans for what would have been a truly wonderful library space.  The East wing, part of the original William Adam design, was to have it’s whole top floor, 80 feet by 60 feet, designated as the Library.  Of course this was never built due to the dispute between William Adam and his client, William Duff, who later became the 1st Earl Fife – who never lived at Duff House anyway!

The 2nd Earl Fife, James, was however clearly – from references in his letters many of which still exist – a very well read gentleman, and he designated what we know today as the Long Gallery in Duff House to be his Library.  He certainly tried to look after his book collection and, for example, in February 1789 he instructed that the windows and bookcases be thrown open, and his large books of prints laid out for airing.  The 4th Earl was an equally avid book collector and by the end of the 19th century the Duff House Library held 15,000 volumes.

Today, the designated “Library” is two rooms on the second floor, which contains a number of glass fronted bookcases with a very fine collection within them – but not the original Duff Library!  This is because the 1st Duke of Fife gave Duff House and it’s estate to the people of Banff and Macduff in 1907 and the collection of books was taken out of the House.  When the restoration, completed in 1995, was being planned Duff House was very fortunate to get permission from the Dunimarle Trustees to allow it’s collection of furniture, artefacts and books to be installed.

The Dunimarle Library – now stored in various places in Duff House – has over 4,500 volumes collected by members of the Erskine family from Torrie House in Fife.  The Erskines thrived at much the same time as the Duffs and shared many parallels; this even extended to their names, such as William and James!  Both families were avid collectors, of artefacts, paintings and books.  The subjects covered by the Dunimarle Library are similar to those known to have been in the original Duff House Library, classics, history, geography, news, law, economics, heraldry, travel; typical subjects for serious libraries of the 18th and 19th centuries to include.  One clear – and interesting – difference was that the original Duff House Library included many Spanish books – because of the 4th Earl Fife’s travel there; and the Dunimarle family library instead has a major section on India and the far east because of John the 4th Baronet of Torrie.

Some of the key books were, perhaps not unexpectedly, the same in both Libraries.  A 17th century Bible, Hume’s 1786 History of England, 18th century works of Shakespeare, Bartolozzi engravings.  While enquiries continue for a complete list of the original Duff House collection, the Friends of Duff House many years ago completed a full catalogue of the Dunimarle Library – which can be viewed in the Study inside the House (once it re-opens) and which it is hoped will go on-line in the future.  Meanwhile all 929 Dunimarle Library books published in the British Isles before 1801 are listed on the English Short Title Catalogue (ESTC).