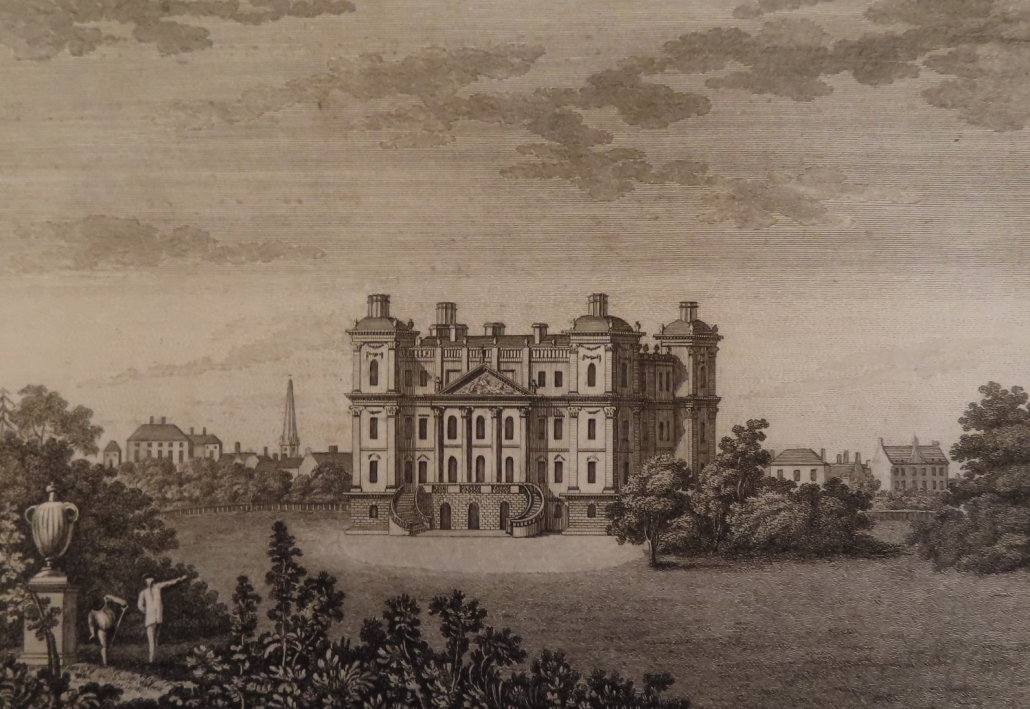 The earliest known photo of Duff House appears in Imlach’s book “History of Banff” and is dated 1868.  Before that there are a number of etchings (starting with one after Cordiner in 1779) and some paintings.

The earliest photo shows the main house looking not too dissimilar to the Duff House of today.  The east extension that was bombed in July 1940 was only built in 1871 and hence doesn’t appear in this photo.  Instead, the photo shows a smaller separate building immediately to the east of the House; this was a kitchen building, because the original main part of the House didn’t include one – it had been designed for the west wing that was never built.

A small photo found in a private collection is believed to date from about 1885 to 1890.  This has three carriages, each with two horses, drawn up outside, with the vestibule door open to the balcony.  This was perhaps on the occasion of some party being held by the Duffs – although the grass at the front doesn’t look very tidy!

By the very late nineteenth century picture postcards were starting; the earliest postmarked date found for Duff House is two in 1903.  As the views show different aspects of what is at the front of Duff House, one of the photos must be earlier in date!  Based on other, later, photos, it seems the fence around the apron was added later, some postcards showing it was effective at keeping sheep out.

By 1908 Duff House was a hotel.  There are a couple of photos with old cars in front of the House, and one dated 1913 shows the first tennis court in front.

After 1913 it became the Sanatorium, a sort of health spa but also conducting research into diabetes and other digestive disorders.  A booklet was produced at this time, and although no date is given, the wording suggests it has not been open very long.  The west wing, now gone, also appears to have gained a taller chimney.

Then from 1923 it was once again a hotel, advertising it’s golf course, and other sports.  This clearly included tennis as the courts out the front seemed to have been improved and with a higher fence.

Once this closed down in 1928 the House stood empty – and the grounds look quite uncared for.  This particular postcard was postmarked and dated by the sender as 1947 – after the bombing – but clearly the photo must have been taken before 1940 as the east wing is shown as undamaged.  This highlights the care that must be taken when using postcards! The War Office took over Duff House in 1940, initially as an internment camp, then POW Camp No 5.  Although no photos exist until after the war, from that point on Duff House is much better documented.