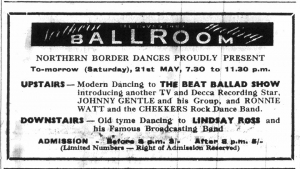 In 1960 the band comprised Johnny, Paul, Carl, Stuart and Thomas. The names don’t exactly trip off the tongue as would John, Paul, George and Ringo a few short years later in 1963 when the band would be known to the world as The Beatles. Johnny (John) Lennon, Paul Ramon (McCartney), Carl (George) Harrison, Stuart de Stael (Sutcliffe) and Thomas (Tommy) Moore formed an early incarnation of the Beatles. What is the connection to Banffshire? In 1960 the band were on a tour of Scotland backing the singer Johnny Gentle. They visited Alloa, Inverness, Fraserburgh, Keith, Forres, Nairn and Peterhead. Although the band were touring as the Silver Beatles, they were simply known as Johnny’s group.
Travelling between Inverness and Fraserburgh the band’s van (with the band inside) was involved in a collision with a car just outside of Banff. The only casualty, beyond being shaken up, was Tommy who was hit in the face by a flying guitar case which resulted in him losing some teeth. Tommy ended up in Chalmers Hospital Banff to get patched up. Apparently the band signed autographs for people who had come out of their houses to see what had happened. One of the sets of autographs later sold to a pop historian for £2500 in 2004.
The crash was reported in the Banffshire Journal of 24 May 1960 making the “Banffie” the first newspaper in the world to write about the Beatles (spelled as Beetles). In spite of his injuries Tommy Moore didn’t miss a date on the tour.
Unfortunately neither Stuart nor Tommy shared in the later, unprecedented success of the Beatles as they conquered the entertainment world in the 1960s.
Stuart died tragically in Hamburg in 1962 and Tommy went back to work as a fork lift driver.