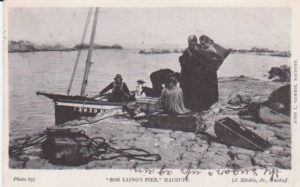 The present Macduff Harbour has not always been the only harbour. The very first detailed map of Macduff – then called “Down” – is dated 1763, and while it shows the West Pier – the present-day one, and the East Pier which is no longer there – it also shows a place called “Laing’s Shore”. This appears to be a natural inlet, the seaward part of which can be seen to the north of the present slipway.

A pier in this location is first indicated on the Taylor and Skinner road maps of 1772, although surprisingly a map of 1826 misses it, while a detailed survey of 1832 clearly shows how the usefulness of this natural inlet was improved by the building of a stone pier along the west side of that inlet. The main photo shows the only known picture of that pier, taken late in the 19th century. The boat is the BF 1879, the “Sovereign”, built in 1891, owned by William Lyall who can be seen on the boat; various other members of his family are also on the pier.

The coastline in the 18th century around Macduff was substantially different from what we can see today; in the picture the green outline is the present, the red is to the same scale traced from the 1832 map.

As far as is known Rob Laing’s Shore or Pier is still in existence, but the building of the Princess Royal Basin between 1914 and 1922, or rather the dredging of that new Basin, meant the spoil had to be put somewhere, and this is where the slip and RNLI building are today. By 1930 the end of Rob Laing’s pier was still visible – circled in red on the aerial photo below.

But in 1952 the Princess Royal basin was deepened and the spoil again dumped along the coast – the land the Aquarium is built on. The subsequent rock armouring along the shore has now completely covered the end of Rob Laing’s Pier.

Unfortunately no record has been found to date as to exactly who Rob Laing was, or who the first “Laing’s Shore” was named after. Certainly there was a Laing family lived in that part of Macduff/Down in the late 18th century, but beyond that no information has yet come to light! 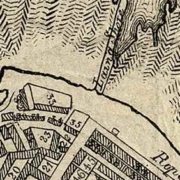 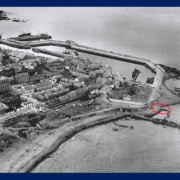 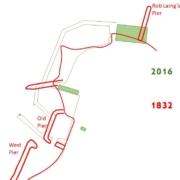