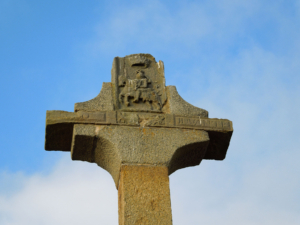 Macduff Town Cross was built in 1783 to mark the creation of the town. Prior to it being granted Burgh of Barony, the small fishing village of Doune hugged the shoreline of what is now Macduff.

The 2nd Earl Fife, eager to demonstrate his wealth and power created the town, named after his family (the Duff’s) and invested considerably in the town to develop the harbour.

In the centre of the cross is enshrined a portion of the ancient cross from Newburgh and Fife. The Macduff cross bears the town arms on each side, and the inscription ‘Virtute and Opera’ or ‘by virtue and industry’, a motto of the Earls Fife.

The cross would have originally sat in the town centre, but was moved to its current site on Doune hill beside the Parish church and was adopted by the town council in 1952.