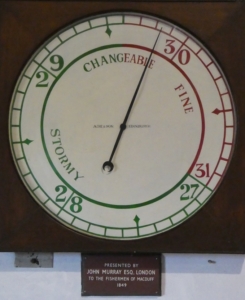 With our apps and TV nowadays we are told all the time what the weather is going to be, but a hundred and seventy years ago there was no weather forecasting. The Macduff and Banff harbours were packed with fishing vessels, and they would put to sea as their skippers wanted to. One of the documented dangers with this was demonstrated in 1857 when a major storm struck; two boats from Buckie were lost, yet boats from Portknockie and Macduff hadn’t put to sea, because they had Barometers in the port and the storm was forecast.

The original Macduff barometer still exists, having been donated to the fishermen of the town in 1849. It used to be on the gable end of No 1 Low Shore (a site around the weighbridge/car park area), but since 1966 has been inside the Fishmarket. This large circular barometer was made in Edinburgh by Adie and Son, as a gift from John Murray Esq of London. Mr Murray was born in Macduff but became a canvas manufacturer, but seemingly never forgot his home town, not only helping save numerous lives with the barometer, but also starting the “Murray Institute” (on the site of the Knowes Hotel) as free schooling for 100 of the local kids – part of the movement sometimes referred to as the “Ragged Schools”.

Less well known is that Banff used to have its own Barometer manufacturer. Around the turn of the 18th century, for about twenty-five years in a shop on Low Street, was one of the Italian “Comitti” family. The family firm is still producing today in London; but original Banff Comitti barometers can be even more expensive than the luxury versions of today!