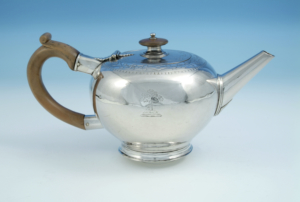 For over two hundred years Banff was known for the high quality work produced by generations of silversmiths. These skilled craftsmen made items ranging from communion cups for churches to cutlery, ewers, watchcases and even buckles. The best known piece of Banff silver is one of the oldest silver teapots made in Scotland, which can be seen in Banff Museum. It was made between 1715 and 1720 and although its maker is unknown it is marked BANF. The town had its own assay mark used to identify pieces made in the town, although different versions of this exist.

The Banff silversmiths owed their trade to the prosperity of the town. A successful trading burgh on the North Sea coast, it was home to many wealthy merchants. Landed families with country estates in the north east also chose to build their town residences in Banff, particularly during the 18th century. Banff has the highest number of Georgian listed buildings in Scotland outside Edinburgh. The owners of these houses needed high quality furnishings to display their wealth, and commissioned items from the Banff silversmiths.

Silversmiths were members of the Incorporation of Hammermen, who in turn belonged to the Incorporated Trades. This body regulated standards, controlled trade and looked after its members.

Today an exciting project has seen the return of silversmithing to Banff once more. The derelict Old Smiddy, a former blacksmith’s and meal house, has been brought back to life by Aberdeenshire Council through funding from the Banff Conservation Area Regeneration Scheme, an initiative run by Historic Environment Scotland, as well as funding from the Scottish Government. This innovative scheme has created a silversmithing centre to revive the lost historic trade of Banff. You can go in and watch the silversmiths at work, or even sign up to learn silversmithing yourself.

The Smiddy
Scroll to top