The Electric Wizard of the North 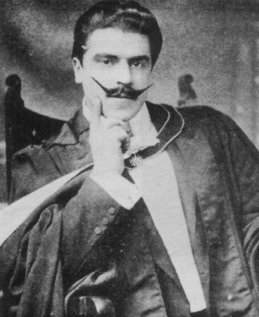 Walford Bodie was a famous magician whose popular and sometimes controversial show toured the UK. In 1905 he moved to Macduff and styled himself ‘The Laird of Macduff’. He used his wealth for the benefit of the town.

Walford Bodie was born in Aberdeen in 1869. He left school at 14 and started working for the National Telephone Company. New technology always fascinated him. In 1887 he performed a magic show in Banff, where he met Jeanie Henry, who came from a show business family. They married the following year. Walford and Jeanie together with three of her sisters developed The Bodie Show, a travelling show incorporating music, ventriloquism, fortune telling and magic.

It was the new technology of electricity which transformed Bodie’s show into something unusual. Drawing on his experience with the Nationa Telephone Company, he developed an electric chair and carried out mock executions of Jeanie’s sister Isabella – La Belle Electra.

His fame and success increased, and he influenced some emerging stars, including Houdini and Charlie Chaplin. However, Walford Bodie also attracted controversy. Some saw his act as distasteful, and when he incorporated supposed electric cures into his act he was taken to court for calling himself Dr Bodie MD.

By this time Walford Bodie had built the Manor House in Macduff. In 1909 Walford and Jeanie’s daughter died of tuberculosis aged 18, and they erected a fountain in Duff Street in her memory. Bodie used his great wealth for the benefit of the town. He paid for public baths to be built and contributed to the creation of Tarlair Golf Course, where he was the first person to tee off when it opened in 1926.

After an extraordinary career, Walford Bodie died in 1939 and is buried in Macduff Churchyard alongside other members of the family, including La Belle Electra.