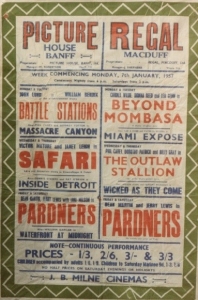 Films have a long history in Banff.  Around the turn of the twentieth century films were being shown in the former skating rink in the grounds of Duff House.  An early post World War 1 precursor of the Picture House in Bridge Street was designed by the Aberdeenshire practice, Sutherland & George, sometime before 1923 and was used for concerts, meetings and as a picture venue.

The Picture House still remembered by many Banffers today at 41-47 Bridge Street was Banff’s first and probably last dedicated fulltime cinema.  It opened in 1937 with “Snow White and the Seven Dwarfs” and served Banff’s cinephiles continuously until Saturday 4th January 1974 when it closed with “Tom Sawyer.”

The Picture House was an example of a ‘back of court’ cinema which was common in Scotland.  In this type of cinema, the entrance was a shopfront with the cinema built in what would have been the back garden of the shop.  In the Bridge Street cinema there were 240 seats in the front section and 144 seats in a stepped raised section at the rear, as opposed to the more usual overhanging balcony.

Films ran full time in the Picture House until the late 1960’s at which time bingo sessions were held on quiet mid-week nights.

When the Picture House was faced with closure it was reported that there was considerable anguish amongst the younger folk in the town who felt that they now had no other option than to be ‘corner boys’ and I imagine, ‘girls.’ (Aberdeen Press @ Journal 17/06/1970)

For many years after the closure, Banffers did not have the opportunity to watch films in a cinema.  However, all is not lost, we now have a community initiative, the Banff Cinema in the Trinity – Harvest Centre in Castle Street, showing pictures on a Friday once a month 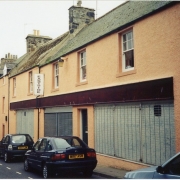