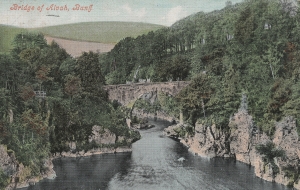 Unfortunately floods are not a new thing for Banff. The most recent event, the Sept 2019 deluge that carried away 7 bridges was locally bad, but the worst floods are generally acknowledged to have been in August 1829. The summer started with a widespread drought in May, and June and July continued hot temperatures. July particularly had some sudden deluges, sometimes causing flash floods. However relevant, it was also noted that the aurora borealis appeared more frequently and brilliantly during July.

But the real problems started on 3rd August. Back then there was no systematic rain measurements but the Gordon’s gardener did and reported 3 inches (75mm) in 24 hours. This is not huge, but what was unusual was the wide area where the rain fell, across the Grampian mountains.

All of the southern Moray Firth rivers were affected and the rivers Dee and Don. The Deveron seemingly was not the worst affected, but all sorts of flood damage was still done all the way along it’s length. And then the river gets to the Craigs of Alvah, which the Bridge of Alvah has spanned since 1772. The river normally passes through a gorge that is 27 feet (8 metres) wide and reportedly 45 feet deep; with the bridge it makes a piece of magnificent scenery.

The top of the bridge arch is 40 feet above normal river level, yet by late on 3rd August just “a very small segment” of the arch was visible. This restriction, which was probably the saving of several lives, resulted in a lake almost 1 mile long to the south of the bridge, filling the valley side to side. The gorge and bridge acted as a sluice in limiting the water coming down to Banff, but even so in the early hours of 4th August it overtopped the Duff House estate wall (which can still be seen through the present town) which otherwise had protected the town. Ultimately the wall failed near to where the silversmith is today. The lower part of Banff flooded – measured as 18 feet and 4 inches above mean low water sea level – flooded almost to the top of Bridge Street. The whole of the Duff House grounds were flooded, and Duff House itself to a height of 4 feet.

Many people disturbed from their sleep sat the early hours out on roofs until they were rescued by boat; the mail coach did manage to get over Banff Bridge during the morning doing their utmost to fulfil their duty, but with passengers disembarked in Macduff, was carried away as it struggled round the bend near what is now the Spotty Bag Shop. Three of the four horses drowned but the crew were saved.