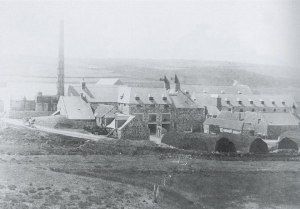 Major James McKilligan was from Banff but had spent many years as a soldier before returning to Banff and being involved in the fish curing trade, before establishing the distillery. Major McKilligan was a Provost of Banff from 1831 to 1833, following in the footsteps of his father, George McKilligan, who was Provost from 1793 till 1796.

By 1863 a new distillery was established at Inverboyndie, on a site that had previously been used for woollen manufacture. Here there was a better supply of water, and it was close to the railway which aided transportation.

The old site of the dam at Mains of Colleonard is reported to have been used as a curling pond in 1888 by Banffshire Curling Club and later the land was part of the nurseries of Raeburn and Co.

The distillery at Inverboyndie by 1886 was successfully producing 200,000 gallons of whisky but was not without its tragedies. The distillery suffered a number of fires over its existence and even fell victim to a German bomb in WW2. The story goes that when Warehouse 12 was hit, whisky casks were blown up and the whisky found its way into the burn where cattle drank. The cattle, they said, were drunk for several days.

By the 1980s the distillery was declining and in 1983 it was finally closed. Most of the main buildings were demolished by 1991.

In 1958 Macduff distillery was built on the east side of the Deveron, and in the 1960s local businessmen wanted to build a new distillery in the grounds of Duff House but this plan wasn’t passed.