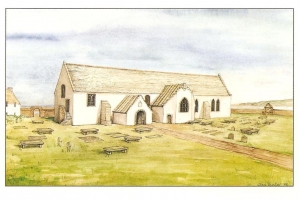 The most important man in Banff in the 16th century was Sir Walter Ogilvie. He had the right to collect the customs in the town, he was frequently Provost of Banff, and he built himself a mansion, where the Town House now stands, which was referred to as the Palace. He also inherited the key fishing rights on the Deveron, and the town’s prosperity, such as it was, came from salmon.

The Ogilvies were a very distinguished family. His grandfather had been High Treasurer of Scotland. Airlie Gardens in Banff recognises the fact that the head of the Ogilvies was Earl of Airlie. Sir Walter was a second son, and not a leading light among the Ogilvies, though he was important enough to be a member of the Scottish Privy Council. In Banff the Ogilvies reigned supreme. Between 1541 and 1627 every Provost was an Ogilvie. Banff had its own MP, then called a Commissioner to Parliament, and all the names we have of these between 1543 and 1621 are Ogilvies. Walter’s son George married the daughter of an earl, and her sister was Mary Seton, one of the Queen’s ‘Four Maries’.  When the Reformation came to Banff, there was a fire at the Carmelites’ property, and the friars were frightened. So they granted their lands in and around Banff on an 11 year lease to George, the son of their friend Sir Walter, who had died the year before. They never claimed it back, but Sandyhill Road and the land around what later would be Duff House became Ogilvie land.

Sir Walter is buried in the Banff aisle, built of the south side of the old parish church to hold his monument, and the only roofed part left of the church. We can presume there was a family pew upstairs in the aisle, where the Ogilvies could look down on the rest of the congregation.

It is called the Banff aisle, because the family went on to be given a peerage. The title was Lord Banff. The last Lord Banff died in 1803.

The name Walter ran in the family. So there was another Walter Ogilvie who built Carnousie, up the Deveron, later in the sixteenth century. They say there’s a head with beard and cap representing him on the house. Another was Provost Walter Ogilvie in 1625. Then we have in the Museum a genealogical table for a Walter Ogilvie, an 18th century merchant in Poland, anxious to prove his distinguished pedigree. And there was the unlucky one who was out in the 1745 rebellion. The index of the Annals of Banff sometimes muddles one with another. But the one we are talking about died on 29th November 1558. 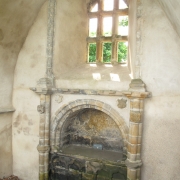 Distilling in Banff
Scroll to top