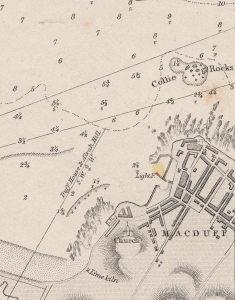 The first plan of Macduff Harbour – as known – is 1763 when the harbour was a simple West and East basin each enclosed with a wall. The West pier – although repaired a few times, and rebuilt at the end – is still today in the same place as when first built in the middle of the 18th century when Earl Fife started to develop his new town, later named Macduff. Since then the eastern side of the harbour has of course gone through many iterations, and has expanded in area about ten-fold.

A sketch, done in 1842 (from Finden’s, Ports, Harbours and Watering Places) shows the new (now the north) breakwater being built, but clearly also shows the West and East piers and there is no sign of a Lighthouse.

The first mention of a Light at Macduff harbour is on an Admiralty chart dated 1845 and shows one on the end of the East pier. Nothing else is known about this first Lighthouse at Macduff. Interestingly, in 1847, the Act for “improving and maintaining” Macduff Harbour specifies the maximum dues that different tonnages of vessels should pay, and this includes a specific charge towards the “Pier Head Lights”. For example a vessel of 50 tons (actually not a weight, but a hull volume measurement of 100 cubic feet) would pay 6d (ie old pence, equivalent to 2½ new pence) for each voyage; or a Herring Boat would pay 5 shillings (25p) for the season.

This first Lighthouse was probably replaced as a result of the works authorised by the 1847 Act which had to be completed by 1854, so that just a couple of years later, the Admiralty chart of 1856 shows that there was a Light now on the end of the West pier, with a height of 25ft above chart datum, flashing red. The only known picture of this second lighthouse is from a very grainy photo taken around 1870.

Within a few years the light was moved back to the West pier, shown by the next Admiralty chart of 1878. The height at that time was also 25ft, and comparing what can be seen from the photos of both, they were both very similar – perhaps the second one was dismantled and rebuilt. This light now had a red sector that showed an approaching vessel if it was going to foul the Collie Rocks.

A detailed photo of this third Lighthouse in 1902 shows it being dismantled as the present north breakwater is being built. The present and fourth Macduff lighthouse was completed in 1905 and is still going strong, with red, white and green sectors for the correct approach directions. This light flashes twice every six seconds and is 39ft (12m) above chart datum. 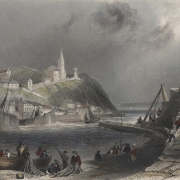 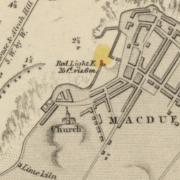 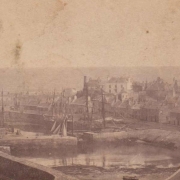 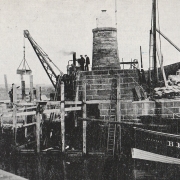 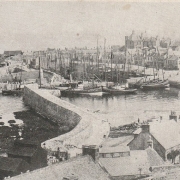