Many People will be aware of the large scale engineering project involved in laying underground electrical cables from the Moray East wind farm to connect with the grid at New Deer.

It was a requirement of the contractors to carry out a detailed archaeological survey of the entire route from the landfall east of Whitehills to the terminal at New Deer. Archaeologists were involved in the planning of the route using exiting information from aerial surveys and were also present to observe as the top layer of soil was stripped back.

There were a number of archaeological remains found at various points along the cable route, the most significant of these being an underground chamber or souterrain just next to the B9139 at Inveboyndie

The remaining structure after excavation was remarkably well preserved and had the characteristic curved shape opened at the South end, the entrance passageway being flanked by large vertical stones. Adjacent to the chamber there were remains of a very large semi-circular structure which probably represents the remains of a ditch. It is probable that this structure extended to form a complete circle under the unexcavated area. It is unclear whether this structure originated from the same period as the souterrain.

Excavation of the structure showed clearly defined post holes indicating that it probably had a wooden or thatched roof. Sadly very few artefacts were found to enable dating of the structure but it is thought to date from the Iron Age – around 500BC.

Souterrains are quite widely distributed throughout North and East Scotland and indeed many are found in Western Europe. Only a few have so far been excavated in this area – perhaps because only a few large scale engineering projects have opened up the trrain over such a wide area. All have the same characteristic “banana” shape. Their particular purpose remains unclear because very few associated artefacts have been found. It seems almost as if the buildings had been deliberately emptied before being abandoned. Our souterrain contained only soil and, given how well the structure has been maintained over so many years, it is almost as if the building had been backfilled with soil. This is a common feature in these souterrains. There has been no specific evidence that they were used for habitation or burial. The current view is that they were used for storage, possibly of crops.

Sadly the site has now been largely obliterated by subsequent powerline work. The archaeologists remain philosophical however. Arguably, if were not this type of project we would not have been aware of its existence. Indeed aerial surveys of crop markings in the area suggest that Iron Age civilisations may have been widespread in the locality.

So, at this point, more questions than answers. Further information may be available if radiocarbon dating is possible. All the findings so far have been meticulously recorded and photographed. We hope to receive a copy of the final report for the museum. Further excavations would depend on future funding – or another major engineering project! 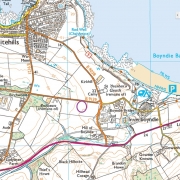 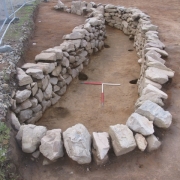