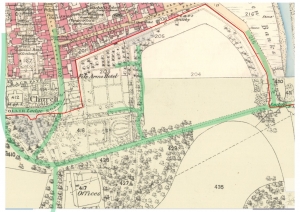 The Vinery – the large glasshouse – that is seen by everyone coming into Banff, used to be part of the Duff House estate. The Vinery is part of a regeneration project just starting. The gardens that are visible today formed part of the flower and kitchen gardens for Duff House. These gardens used to be much larger, including all of the area that is now Airlie Gardens sheltered housing, as well as Princess Royal and what has commonly come to be known as Canal Park today.

The image is a composite from the 25inch maps of Banff surveyed in 1867. The red line is where the wall is today, extended to the west to represent where the wall used to continue before going along the east side of Sandyhills road where it is today. Everything to the south of the red line was the Duff estate, most of the area to the north was the Burgh of Banff. Overlaid on to the map, in a light shade of green is the present road network for comparison.

The 1867 map has been shown specifically because it is the closest available local map to 1873, and that year is relevant to a most interesting source of local history. John Donaldson was one of the Duff House gardeners in 1873 and 1874 and it is good fortune that the diary he wrote of his time in Banff still exists, even though it is believed he later emigrated.

This diary, although intended as his own record, makes many useful references to how the gardens were at the time, what was grown in them, and some of what life was like in Banff at the time. For example one of the useful facts from this diary is the year the Vinery was built. The available maps, 1867 without the Vinery shown, and 1902 with it clearly shown, only give a window for it’s age; the Diary provides the evidence that it was built in 1873; also that the vines were originally planted that yea. Brief mentions of the tasks that were done to look after them are included – which clearly worked based on the extensive growth shown in an 1890 photo.

The Diary also shows how hard the gardeners worked. Not only did they work 6 days a week, with only Sunday off, but he worked all of Christmas Day, initially cutting down some holly, but the rest of the day “nailing”, putting nails into the garden walls for wires up which fruit trees would be trained, as well as probably for the vines. Christmas Day 1873 was a Thursday, and although it had snowed at the beginning of that week, it was a fine warm day on Thursday!

Inspired by Banff
Scroll to top