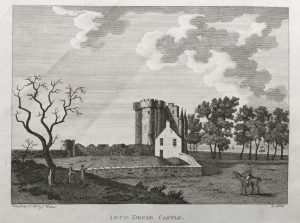 Last night there was a spectacular photo on Facebook of the northern lights behind Inchdrewer (Inchedrour/ Inch Druar) castle, a sixteenth century tower house, three miles from Banff. This was a reminder of the stories associated with the castle about the ghost of Lord Banff, returning to the scene of his death. People speak about flames lighting up the castle ruins – sceptics would say that the sunset can look spectacular behind the castle – could this be the flames that people speak of seeing?

Both the castle and its inhabitants have had a turbulent history.

In 1550 Inchdrewer was sold to the Curror family who also owned Durn estate. They are believed to have built the castle. The castle has been remodelled over time.

In 1639 Inchdrewer castle was ransacked by Covenanter troops under the leadership of Robert Munro, as George Ogilvie, who owned it by then, was a Royalist supporter.

In 1713 Lord Banff, George Ogilvie, was murdered and then the castle was set on fire and despite three local lads being arrested for the crime, no one was ever found guilty of his murder. One of the three, James Milne, was an ancestor of Robin Grinnell-Milne – later to become Count Robin de la Lanne-Mirrlees.

In 1746, the Duke of Cumberland attacked the castle in his hunt for Prince Charles Edward Stuart.

The castle continued to be lived in until the early 1800s. After this it fell into disrepair. In the 1960s, Count Robin de la Lanne-Mirrlees bought the castle and began its restoration, at the time explaining that he wished to make reparation for the burning of the castle.

The castle was never completely restored. With the death of Count Robin de la Lanne-Mirrlees, the castle was put up for sale and in 2013 was sold to a Russian lady, former supermodel and fashion designer, Olga Roh and her husband Stephan Roh who want to restore the castle.