A Jacobite Adventurer in Banff 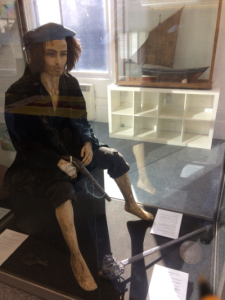 In the Museum of Banff in one of the cases there’s a man in rags with a gun. This is the Chevalier de Johnstone, who spent an unhappy 24 hours in Banff in 1746. (It is possible he had visited the town beforehand). James Johnstone was a Captain in the Jacobite army defeated at Culloden, an aide-de-camp to the Prince. As his brother-in-law, Lord Rollo, had a government appointment as inspector of merchant vessels at Banff, James thought he could pull strings to help him sneak away by sea to the continent.

We must first explain the rags. It was suicidal to wear the uniform of an officer of a defeated army, so he was dressed in rags previously used for cleaning out the stables of a kindly Presbyterian minister who had put him up for the night. James approached Banff on foot late at night, and went straight to Provost Duff’s. The Provost and his wife and two charming daughters took him in – a serious risk. The risk became very apparent at 6.00am the next morning, when the house’s courtyard was filled with soldiers. There was a very tense quarter of an hour, but it was a false alarm. The soldiers had merely wanted somewhere out of the sight of their officers for a private punch-up. Until the 19C there was a house on High Shore with a courtyard, which was probably the very house.

Lord Rollo then came round and firmly told him to go away. There was no way he could smuggle him on a boat under the eyes of the garrison. Johnstone never forgave Rollo for this, but Rollo was almost certainly right. Johnstone, after a very pleasant day with the Duffs (no close relatives of the Earl) sneaked out of Banff by night and went south overland, and in the end got to France another way. He became a soldier in the armies of France, fighting in Canada against the British. Somewhere along the way he picked up the title Chevalier de Johnstone and wrote his memoirs, a gripping yarn. There is what claims to be a portrait of him on the web, but it is almost identical with one of General Wolfe, who was fighting on the British side in Canada in the same war (and also visited Banff, but that’s another story).