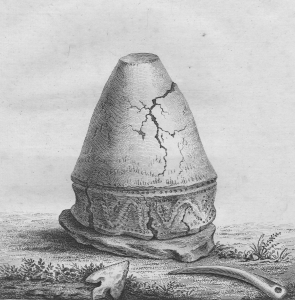 One of the first tourists that recorded their trip around Scotland was Thomas Pennant; he made two documented trips, in 1769 and 1772. It was 250 years ago last week, 14th August in 1769, that he visited Banff. One of his interests was archaeology and he recorded a most interesting find.

An urn, filled with ashes, and placed upside down on a stone, was discovered on the Hill of Doune (spelled “Down” at the time). It was found with three smaller urns, although these are reported as quite plain without the decoration as shown in the picture. About four thousand years ago this seemed to be the practice, to put a person’s cremated remains inside an urn. Pieces of a similar urn with the same pattern have also been found at Montquhitter, just a few miles southeast of Macduff. A number of others have been found in the area, and specifically in 1864 another was found at the foot of the Hill of Doune while work was carried out to widen Banff Bridge. A photo of the 1864 one can be seen in the Museum of Banff, alongside a real example of a bronze age urn.

The whereabouts of the larger urn reported in 1769, fully thirteen inches tall, and other items found with it such as a flint arrowhead, what seems to be described as a flint knapping tool (ie for striking a piece of flint to sharpen it), as well as a bone, are not known. The 1864 urn is now in the National Museums of Scotland.

Another notable find on Hill of Doune has been a stone axe – found in 1883 – although whether this is truly “Stone Age” has not been declared.

These finds seem to establish that where we live has been enjoyed by humans for many thousands of years.