The Linen Trade in Banff 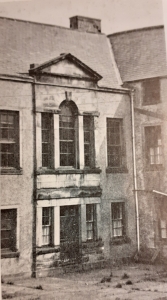 In the 1700s flax and linen provided Banff and the surrounding area with a huge amount of employment.

In 1798 the linen manufacturing business set up in 1753 and owned by the Robinson family provided work for 300 workers within Banff and 4000 spinners in the surrounding area. The business in Banff was run from Kingswell Lane. It’s been estimated that 50,000 yards of cloth were made in Banff in 1790 and 5000 people were employed in Banff Parish making linen thread, which was sent to Leith by ship and then by road to Nottingham.

Flax was imported from Holland (3500 matts per annum) and grown locally. Flax was grown and then went through a large number of processes to turn it into linen thread. The fibres of the woody stem are used to make the linen but the process for extracting the fibres is quite labour- intensive and time-consuming. This may have been why other fibres such as cotton and wool became more commonly used and led to the decline of the local linen industry by the mid-1800s.

One of the challenges was to produce really white linen and the Dutch developed a process of soaking the linen in sour milk and fulling (pounding) it with water powered hammers. The Robinsons from Banff are credited with introducing this technique to the Midlands of England, having taken over a mill on the River Leen at Bulwell in 1740.

The Robinsons were a family (originally a family of Robertson) from Inverbervie who had moved to Nottingham and then adopted the name Robinson. One of the sons – George – came to Banff, when William his brother was murdered by officers of the 43rd regiment, after a skirmish outside the Black Bull Inn. William had been a partner to Alexander Hay in linen manufacture in Banff.  In 1765 George married Bathia, the daughter of George Garden a merchant in Banff. George Robinson and his son George Garden Robinson were the Provosts of Banff for a considerable length of time (1784 -1831) with only two periods with other people in post. George Robinson was a generous host who was said to be fair-minded. 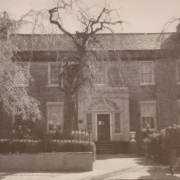