Is the Macduff Mystery solved? 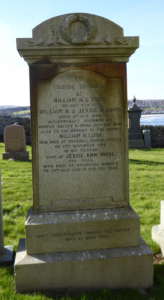 Doddie Dickson kept a roll of honour in his shop to record names and information about each man from Macduff who had enlisted, fought and died, and of the ones who came home to family and friends. This roll of honour was used to list the names that are engraved on the War Memorial in Macduff. Doddie Dickson collected together information on 141 people, but there are 150 names on the War Memorial, and one of the names that were recorded by Doddie Dickson is not on the war memorial.

The Roll of Honour book by Doddie Dickson was published on 15th April 1920, and for the commemoration of the 90th Anniversary of WW1, a second book was published using the material from Doddie’s book.  Stanley Bruce in 2008 produced his book for the Banffshire Maritime Heritage Association.  In Stanley’s book he includes the missing nine names from the Doddie Dickson Roll of Honour.

Some theories were put together by Stanley Bruce for his 2008 book, was he just missed off the war memorial?  As he drowned perhaps there was no body to bury; did he suffer shell shock, and was unjustly treated as a coward? Perhaps he didn’t die.

William Henry  Conrad Lohr was aged about 19 when he enlisted.

The mystery has remained  until some research work by Stanley West of Macduff who has discovered the gravestone of William Henry Conrad  Lohr in Doune Cemetery Macduff, another surprise!

The stone is in memory of William Henry Conrad Lohr and his parents. His actual burial place is Trichur Madras India.