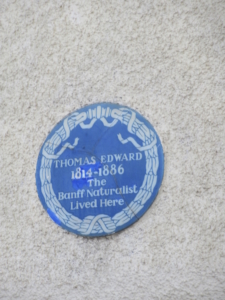 A blue plaque on the gable end of a house on Deveronside marks the home of Thomas Edward (1814-86), naturalist.

Thomas’s story is one of complete dedication to his passion for the natural world, but his life was hard. Born in Gosport because his father was posted south with the militia, he grew up in Aberdeen. Throughout his childhood he drove his parents to distraction, constantly wandering far and wide in search of wildlife and bringing home all kinds of creatures from beetles and newts to hedgehogs and birds. Attempts to do the same at school meant that his formal education ended at the age of six, by which time he had been expelled from three schools.

After some time as a factory boy he was apprenticed as a shoemaker, and learned the trade which he would follow in Banff for most of his life. He worked long hours and had little money to support his large family. His passion for the natural world continued, and after long days working he spent the nights exploring the fields and the shoreline, collecting and observing in all weathers. He taught himself taxidermy and built up an extensive collection of specimens which he exhibited both in Banff and Aberdeen, but the exhibitions were a financial failure. Professors at the university told him he was ahead of his time.

The support and encouragement of a friend, Rev James Smith of Monquhitter, gradually improved Thomas Edward’s fortunes.  Smith helped him with his reading and writing, and encouraged him to begin to publish the results of his observations and to correspond with other British naturalists. He gradually began to be recognised as an expert on a wide range of creatures and plants. In 1852 he was appointed curator of Banff Museum, and you can still see some of his specimens on display there today. As his reputation grew he was elected an Associate of the Linnean Society and other natural history societies. In 1876 Samuel Smiles published his biography, The Life of a Scotch Naturalist, and the following year Queen Victoria awarded him a civil list pension on the recommendation of, among others, Charles Darwin. The genius of Thomas Edward, Banff’s naturalist, had at last been recognised.

Banff and the Jacobites
Scroll to top