James of the hills

The legend of James Macpherson 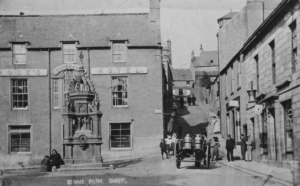 James Macpherson, or ‘James of the hills’, has been described as Banff’s Robin Hood. He and his band of followers roamed the north east, and were said to steal only from those who could afford it and to give much of their loot to the poor. They targeted market towns, driving sheep and cattle into the hills. James was a brilliant fiddle player, adding to the romance surrounding his adventures.

When James Macpherson and two of his followers were eventually captured, they were imprisoned in the Tolbooth in Low Street, Banff. People gathered in the street outside to listen to him playing his fiddle inside the dungeon. He was brought to trial on 7 November 1700 and found guilty of ‘going up and doune the country armed, and keeping the mercats in ane hostile manner, and that you are thieves, and receptors of thieves.’

On the day he was to die, James stood at the foot of the gallows and played a lament he had composed himself. He then offered his fiddle to anyone who would play the tune at his wake but, fearful of the authorities, no-one would accept it. In disgust, James Macpherson broke his fiddle in two, then mounted the gallows and was hanged.

Another story tells that the execution should never have taken place. A pardon was already on its way to Banff, but the authorities were determined to be rid of this thorn in their side. They moved the town clock forward and carried out the hanging several hours early to ensure that James Macpherson would be dead before the pardon arrived. It’s said that there is no clock on the side of Macduff church tower which faces Banff in protest at this injustice.

By the time Robert Burns visited Banff in 1787, the legend of James Macpherson was already celebrated in a ballad which supposedly used the tune Macpherson had played at the gallows. Robert Burns penned his own version of the traditional song which is still sung to this day.

Farewell, ye dungeons dark and strong,
The wretch’s destinie!
Macpherson’s time will not be long
On yonder gallows-tree.
Sae rantingly, sae wantonly,
Sae dauntingly gaed he;
He play’d a spring, and danc’d it round,
Below the gallows-tree.