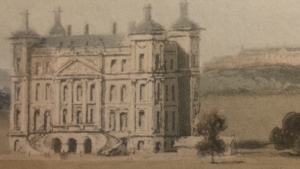 When you visit Duff House nowadays you can enjoy a light lunch or afternoon tea in the Tearoom – behind which is a reasonable kitchen, installed only in the mid-1990s when the House was renovated.

The original William Adam design for Duff House included a 30ft x 35ft kitchen in the west wing, plus a Bakehouse, Larder and a number of other storerooms, as well as offices. As is well known unfortunately the wings were never built; consequently Duff House was left without a functioning kitchen. This must have made life quite difficult to live there, and hence James the 2nd Earl Fife instructed for a kitchen to be built in the 1770’s. He decreed that it should be built with a gap of 6 feet from the east side of the House, so that in the event of a fire the House was not at risk. This may not have been the first kitchen of course.

The earliest view of a building to the east was painted about 1800 by Hugh Williams, but this shows a building substantially more than 6ft from the main House. Perhaps it was artistic licence, because an engraving from 1807 shows a similar looking building in the more expected position. It certainly isn’t 900 sqft of kitchen as William Adam had designed but no doubt it was functional. The next image of a building there is 1822 – now in the time of the 4th Earl Fife – which shows something larger. Reportedly James the 4th Earl liked entertaining and although he was not living permanently at Duff House until 1833, more facilities would no doubt have been helpful.

In 1845 the Fife Arms Hotel was completed on Low Street, so that guests could be properly accommodated. The first substantial kitchen facilities at Duff House itself were in the 1870 east wing – which lasted until the 1950s when the structure (bombed in 1940 during it’s time as Prisoner of War Camp No 5) was demolished.

No reported trace was found of the 1770 kitchen nor the early 18th century kitchen when the House was refurbished in the 1990s. The foundations of the 1870 east wing are still in place as were found during the building of the war memorial and the dry spell of 2018, but no hint of the earlier kitchens is known.