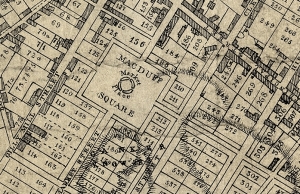 Many towns around the UK have a Market Street, like Macduff; or a Market Place, like Banff. Old Market Place in Banff, between Tesco and The Spotty Bag shop, was indeed just that – a place where markets were held, although other places have also been used.

However, in Macduff, it seems Market Street was not used for that purpose and the name has a different background. The layout of the town of Macduff was first put down in the mid-18th century, and was a very grid like arrangement, the wide roads of Gilly Mill St (now Gellymill), Market St and High Street intended to run the full width of the town from the shore to the Law of Down; with just one wide road – “Principal Street” – now Duff St, crossing it NW to SE. A number of other smaller roads also in a grid pattern supported a total set of 800 building plots – only about a third of which had buildings on by the early nineteenth century.

The street names are still there but the only one that runs as originally drawn is Gellymill St, presumably because it was fully in existence already supporting the village of Down. Market St runs part of the way as originally drawn on the Earl Fife’s maps, and was intended to have the “Macduff Square” and “Market Place” half way along. Instead, what we have today at that location is mostly an open area in front of the present Knowes Hotel – but it was never turned into a town square. Perhaps it was the steepness of the slopes that persuaded people that having such a strict grid pattern of rows and houses, let alone trying to set up stalls for a market, was not practical. The line of Market St that was intended can still be seen by the steep path that goes up the side of the War Memorial and onwards to one part of today’s McKay Road. Climbing that path is energetic, building on it seems as though it was too much of an unnecessary – and understandable – challenge in Victorian times!