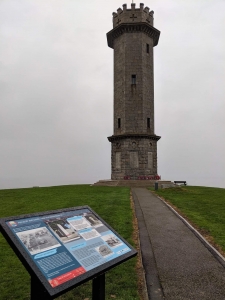 Warning this is a very sad story

In 1901 James was with his parents and siblings at 25 High Shore Macduff.  His father John was aged 50 and his mother Elizabeth (Betsy) was aged 44.

When James’s parents married in 1884 his father John was already a widower aged 32 and a fisherman.  James followed in his father’s footsteps and became a fisherman. But when war was declared he enrolled in the Royal Navy Reserve on 16th March 1915

James had married Marjory Duthie May and began to have children, first a daughter Mary followed by a son Robert, followed by another girl Lizzie and finally a son James who was only just born when James was demobbed after the end of WW1.

James was ‘dispersed’ to shore at demobilisation on 18 February 1919 arriving home on 28 February 1919.  His wife had just given birth to their son James.

As James parents were on their way to the cemetery taking their son, daughter-in-law, and grandchildren to be buried their remaining grandson Robert died.

The only surviving child was a daughter Mary.

Erected by Mary W Wilson in loving memory of her parents, bothers & sister who died

BPHSMOB Our Lady of Banff
Scroll to top