Our Lady of Banff

For hundreds of years the patron saint of Banff was the Virgin Mary, mother of Jesus. There they are, the mother and child, on Banff’s coat of arms to this day. The fine stained glass window on the staircase up to the Museum has them as its centrepiece. The Mercat Cross on the Plainstones in Low Street has on the front Christ crucified, with Mary and John on either side, but most unusually, facing the other way, it has the Virgin and Child. That cross is in fact a modern copy, and the real medieval mercat cross, wonderfully weathered and evocative, is in the Banff Museum. In even worse condition, because it was probably damaged when it was dug up, is the Banff Pieta, a very rare piece of medieval sculpture, also in the Museum. The Pieta shows the tragic sight of the Virgin cradling the body of her dead son after the crucifixion.

These pieces of sculpture take us back to the Middle Ages. But what is surprising and wonderful to a historian is another carving of the Virgin and Child. We should remember that the Reformation in Scotland in 1560 was a generation later than England, but much more thorough. One key aspect of it was the destruction of statues and paintings and glass: “Thou shalt not make to thyself any graven image” (Exodus 20). The Reformed Church had no time for statues of the Virgin. And yet, if you stand by the Mercat Cross and look away from the traffic towards the town steeple there fixed in the wall is an image of the Virgin and Child dated 1628. (There is another undated one above it.)  That is 68 years after the Scottish Reformation. Banff was a town where they did not want to throw the baby out with the bathwater They loved the Episcopalian compromises between Catholic and Reformed, with set forms of prayer, though in English not in Latin, and they kept the old saints’ days and the great feasts of the church, like Christmas and Easter (then called Yule and Pasch).  And obviously they had no objection to the new image of Our Lady of Banff. Perhaps they explained it as purely heraldic. 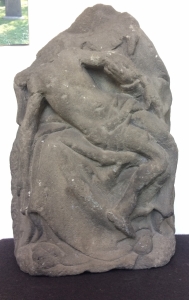 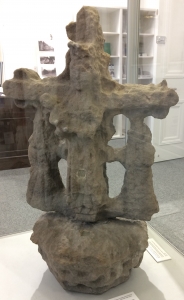