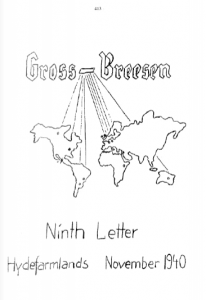 In the mid-1930s the Jewish community in Germany set up a training farm at Gross Breesen on the border of Germany and Poland. The aim of the farm was to take young Jewish students out of the escalating anti-Jewish situation and train them to be farm workers and allow them to move abroad to work, away from harm.

The farm was around 576 acres of woodland and fields where they kept cows, horses, grew potatoes and hay. The students worked on the farm but also learnt life skills through a broad curriculum. This was led by Dr Curt Bondy a man who believed in teaching the students to always think of their actions – what would be the results of them.

The school operated successfully from 1936 until Kristellnacht on 10th November 1938 when Jewish owned businesses were destroyed and Jews were rounded up for imprisonment. It reached Gross Breesen and the Gestapo went through the castle, breaking everything including a grand piano. They arrested all the males over the age of 18.

Over the period of time it was open, 150 students from the school travelled overseas to live and work.

One of these students was called Ilse and she travelled via Kindertransport to Britain in 1939 from Danzig, eight days before the war started. She then landed up at Upper Culphin, outside Cornhill.

On October 18th 1940 Ilse writes the following from Upper Culphin:

“I am now already three weeks in my new home in the north of Scotland. My boss, an elderly lady with a thirteen year old son and two workmen are the only residents on the farm. We have mainly pastures, since we have quite a number of animals. 6 cows, 20 calves, 6 draught horses, 3 foals, apart from 2 pigs and about 150 fowls. It is my job to look after the animals. Last week, almost every day I helped outside with the oats harvest, here everything ripens later, as we have a rather harsh climate. The whole surroundings here are splendid. The farm is situated on a hilly landscape. On one side one sees high mountains in the background, on the other side the ocean, which is quite rough here. On the hills one can see the farmhouses standing here and there – Unfortunately it is terribly lonely here, it is a pity that none of the other Breeseners are in the neighbourhood.” (the elderly lady at Upper Culphin is my grandmother)

We can trace her journey after this – in 1940 – all German and Austrian women over the age of 16 and under 60 were interned on the Isle of Man and by November Ilse was in the woman’s camp of Port of St Mary on the Isle of Man.

By 1944 she has been released from internment and after working at Manor Farm in the South of England has moved to work on a farm nearer to London.

By 1947 she is married and living in London.

It is constantly amazing to see the links between our area and other parts of the world.

Out of the Blue
Scroll to top