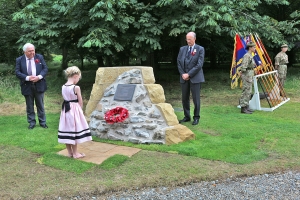 Imagine you are back on 1940; the 2nd World War is happening – it’s all over the news; but locally the only real sign is that you know there are German prisoners of war behind high barbed wire fences down at Duff House. And of course more uniforms around town then there used to be – including a tented observer post up on Doune Hill.

Specifically it’s Monday morning, 22nd July 1940 – 79 years ago. The day is just getting going, just after nine o’clock in the morning – another great summer morning. A lone Heinkel bomber disturbs the peace, first dropping some incendiaries around Macduff, then no doubt spotted the fortifications around a stately home. It seems four high explosive bombs were dropped on Duff House; two that landed in the main building failed to explode or we would not have been able to enjoy the House today; two more landed on what used to be the east wing of Duff House (built 1870 – the Main House was 1735) and did explode.

What the Heinkel pilot may not have known is that Duff House was Prisoner of War Cap No5, and amongst others there were 47 officers and crew from the recently sunk U-26. The prisoners were all lined up outside for morning roll call at the time, and six were killed, plus two of the British guards. Many were injured, some treated on scene, with 13 admitted to Chalmers Hospital in Banff.

This massive event for Banff and Macduff was commemorated in 2018 on the 78th anniversary, with the German Consul General and the Deputy Lord Lieutenant unveiling a memorial that can be seen built directly on the original corner foundations of Duff House east wing.

Despite years of research into this bombing several mysteries still remain; was the bombing of Duff House just an opportune moment or was it deliberate? Why is there no official file for POW camp No5? Why were so many British regiments represented in the manning of Duff House – and none of them mentioned in the “General Return of the Strength of the British Army” in July 1940? Why were the soldiers staying in the main House, and the guards in the Nissen huts (that used to be to the east of the House)?