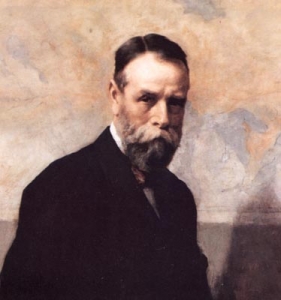 The town of Banff in Canada is located on the Bow River in the Canadian Rockies and was founded in 1883. In 1883 three railway workers discovered hot springs, while working on the Canadian Pacific Railway. The Hot Springs Reserve was formed and with the opening of the Banff Springs hotel, the tourist destination was on the map. It was its position on the Canadian Pacific railway that led to its success.

Banff was originally referred to as Siding 29 but was renamed by Lord Strathcona (Donald Smith) on 25th November 1883.

Two individuals are said to have suggested the name Banff. The first one was George Stephen who hailed from Dufftown in Banffshire and was Lord Strathcona’s cousin. He emigrated to Canada aged twenty one and after working in retail, became successful in a number of projects, including becoming a director of the Bank of Montreal. He then bought a railway company with his cousin, Donald Smith (Lord Strathcona) which became very successful. The Canadian Pacific Railway then became the focus of his attention. The Canadian Pacific railway was incorporated on February 16th 1881 with George Stephen as its President.

On November 7th 1885 the east and west portions of the railway met at Craigellachie and Donald Smith drove in the last spike to mark the completion of the railway, a mammoth achievement.

The second person who suggested the name was Harry Sandison. He was from Portsoy and a brother of Neil Sandison from Banff. He was apprenticed, aged twelve in a tailor’s shop and then when he was nineteen he emigrated from Scotland to Canada and settled in Winnipeg. He was a successful businessman who aged forty one retired from his business to devote himself to public service. In conversation with a Mr McTavish, a fellow Scot, who was a director of the Canadian Pacific Railway, Harry suggested Banff as the name for Siding 29. Mr McTavish suggested this and George Stephen thought this was a great idea and Banff in Canada was officially named.