The Changing Mouth of the River Deveron 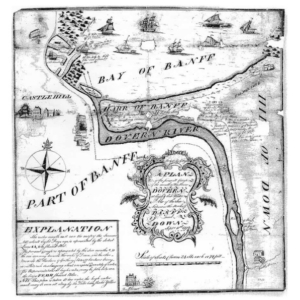 The mouth of the River Deveron is such an important landmark for all of us that live in Banff and Macduff and over time it has changed quite dramatically, sometimes naturally but more often perhaps by human hand.

There has always been the threat of flooding from large spates, often resulting from high levels of rainfall further upstream. In January 1764 while the first bridge was under construction, the principal pillar of the bridge was thrown in to the river by the force of the Deveron, swollen by high rainfall.

In September 1768 there was a report that the Deveron had risen very high and several houses and mills as well as sheep, cattle and horses were carried away. The bridge at Banff was completely destroyed. The present bridge was built in 1779, designed by John Smeaton. Over the years flooding at high tide, combined with high river levels, has always been a threat.

In October 1848 the river had narrowed so much that a spate in the river led to flooding in Old Market Place. It was decided to cut a channel through the narrowest point and enable more water to reach the sea more quickly. This was completed by policemen with shovels. After removing only a few shovelfuls of shingle the pressure of the water in the river forced a passage through the bar. This opening was twenty yards wide and yards to the east of where the river naturally entered the sea. This cutting through the bar was carried out under threat of flood at various times, for example, in 1893, when a cutting was made opposite the end of the Greenbanks.

Perhaps one of the major changes to the river mouth was in 1942 when George Wimpey and Co. took 19019 cubic yards of shingle and sand off the foreshore at Palmer Cove to help with the construction of Boyndie Aerodrome at a cost of £1906 8s 6d.