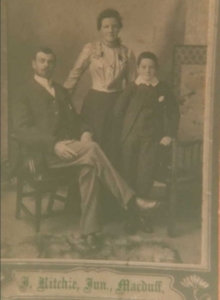 James Mathieson Stuart was born on 7th December 1894 at 26 Duff Street, Macduff.  He was the son of Donald Stuart and Jessie Beveridge.   Donald Stuart was a painter and decorator and for 40 years lived with his family at 33 Gellymill Street Macduff.    Donald and Jessie had a second child Adeline Irvine Stuart born in 1899 but she sadly died of whooping cough aged just 15 months.

War was declared on 28th July 1914 and this interrupted James’s studies.  At the time this war would have been viewed as an exciting ‘adventure’ for young men, and James enlisted at Keith on 5th September 1914 into the 6th Battalion the Gordon Highlanders.    After his basic training he was deployed to France in November 1914 landing at Havre.

The battalion were engaged in various actions on the Western Front and, on Christmas day in 1914, they did participate in the Christmas Truce.  Whether James Mathieson Stuart used his football skills in that truce is not known, but football was played.

James Mathieson Stuart was wounded in January 1915 and was invalided home in February.  He re-joined the Battalion in time to take part in an attack on 25th September 1915 when he fell in action.    At the time of his death James was acting as a field messenger which was one of the most dangerous jobs on the Western front.

The photograph above is C 1905 Donald Stuart, Jessie Beveridge and James Mathieson Stuart possibly taken before he started at Banff Academy

Copyright 2019 by Mary Arnold QG
All rights reserved. No part of this publication may be reproduced or transmitted in any form or by any means, electronic or mechanical, including photocopy, recording or any information storage on retrieval system, without permission in writing from the copyright owner.