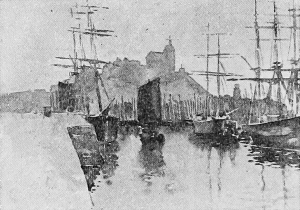 It is well known that in 1773 Samuel Johnson, the famous poet, playright, traveller and author, came through Banff and recorded “I remember nothing that particularly claimed my attention”. He stayed in the Black Bull Inn on Low St but clearly was not impressed: “We found here but an indifferent inn.” This was during his journey to the Hebrides and has become a widely published diary.

But Samuel Johnson is not the only traveller to have been on a quest to the Hebrides and also stopped off in Banff – although this time the traveller was on their way back. In 1888, a bit over a hundred years after Dr Johnson, Elizabeth Pennell, an American traveller and authoress, also stayed in Banff. Like Johnson she travelled a lot on foot, occasionally by boat, and sometimes by stagecoach – the world seemingly hadn’t moved on that much; except Elizabeth did sometimes use the train which is how she arrived from Sandend into Banff. Unfortunately, similar to Dr Johnson, she wasn’t very impressed with the town either:

“We came to Banff late in the afternoon, just as the fishing boats were putting out to sea, one beyond another on the gray water, the farthest but faint specks on the horizon. The best thing about Banff is that in fifteen or twenty minutes you can be out of it and in Macduff. The shore here makes a great curve. On one point is Banff, on the other Macduff; half-way between, a many-arched bridge spans the river Deveron, and close by the big house of the Earl of Fife shows through the trees of his park. High on the hill of Macduff stands the white kirk; it overlooks the town, with its many rows of fishermen’s houses, and the harbor, where the black masts rise far above the gray walls, and the fishermen spread out their nets to dry, and the dark-sailed boats are always coming and going, and boys paddle in the twilight. And
if you go to the far end of the harbor, where the light-house is, you look to the spires and chimneys and roofs of Banff climbing up their hill-side, and beyond to a shadowy point of land like a pale gray cloud-bank on the water.”

A further co-incidence is that she stayed at the Fife Arms Hotel on Low St – the establishment that had replaced the Black Bull Inn in about 1845, and was used by the Earl’s Fife for their visitors, and it seems at least by the 6th Earl (who a year later married the Princess Royal and became the 1st Duke of Fife). Mrs Pennell was not too impressed either:

“It was easy to see what they thought of us at the Fife Arms, where we stayed in Banff. We were given our breakfast with the nurse and children, while the great man breakfasted in state in a near dining-room. They ate very like ordinary children, but their clothes showed them to be little boys and girls of aesthetic distinction. I fear, however, we were not properly impressed.”

Fortunately Elizabeth Pennell was also an artist and two of her local pictures are shown; and even more fortunate that Banff and the Fife Arms are well worth a visit today! 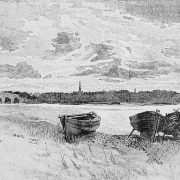