Most places in the country can claim some link to this famous battle on 21st October 1805, which took place off Cape Trafalgar in southwest Spain, west of Gibraltar and south of Cadiz. Everyone knows of Horatio Nelson who commanded the winning British fleet, but there were other very notable casualties. Even by December 1806 there were published pleas that the two other fallen Captains should also be celebrated – and one of these was Captain George Duff.

He was born in 1764, youngest son of James Duff, a solicitor working in Banff (who is buried in St Mary’s churchyard), believed to have lived on the east side of High Shore. George was a first cousin once removed of James, 2nd Earl Fife of Duff House. George was adventurous and first went to sea – as a stowaway – at the age of just nine. The captain returned him to his father, who realised his maritime interest and educated him accordingly. At the age of thirteen he joined the ship-of-the-line, the Panther of sixty guns, and fought many times in the American Revolution, the Mediterranean and the West Indies – becoming a lieutenant when he was sixteen because of his gallant services.

His godfather was the Duke of Gordon and so George met or was promoted to many important men of the day. In 1790 he was given his first command, that of the brand new sloop, HMS Martin, working along the east coast of Scotland. One of his better duties was to embark the Duke of Gordon for a tour of the Northern Isles in Sept 1791; one of the worst to take part in pressganging for sailors.

His childhood sweetheart was Sophia Dirom whose father had a house in Banff. He married her on 6th May 1791 – but set up house in Edinburgh. They had one son and four daughters.

After considerable experience he became Captain of HMS Mars, a 74 gun third-rate ship-of-the-line in 1804. He became friends with Nelson and with Rear Admiral Collingwood, second in command of the fleet, and was entrusted with command of the flotilla to watch the combined French and Spanish fleet in Cadiz. He successfully signalled their exit on 20th Oct leading directly to the Battle of Trafalgar the next day.

On the day of the battle, the Mars was the third ship to break the enemy lines; they were attacked by one Spanish three decker and three French warships. They thought they had disabled the Fougueux but she fired a volley, and one cannonball hit George. His body was draped in a Union Jack and much revered by his crew. The Mars continued to fight throughout the rest of the battle.

One of the poignant parts of George’s story is that as the Mars was moving into battle around noon on 21st October he penned a quick note to his wife – he normally wrote every day. That letter still exists because George’s own son, Norwich, was also on board. “I have just time to tell you we are just going into battle with the Combined [fleet]. I hope and trust in God that we shall all behave as becomes us, and that I may yet have the happiness of taking my beloved wife and children in my arms. Norwich is quite well and happy; I have however ordered him off the [quarter] Deck. Yours ever and most truly.”

Unfortunately George didn’t make it back, but Norwich did. George was buried at sea on the evening of the battle but a memorial was erected next to Nelson’s in the crypt of St Paul’s Cathedral; this shows his head in profile, and also a young man crying at his side holding a flag. A reminder of the story of his death. Norwich became an Admiral himself, and clearly the events on the Mars stayed with him because he had his coat of arms augmented with the image shown – note the flag at half mast indicating the Captain’s death. 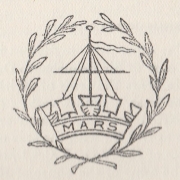 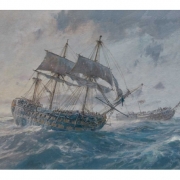 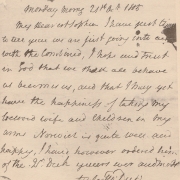 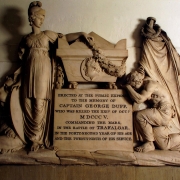