When every visitor was news 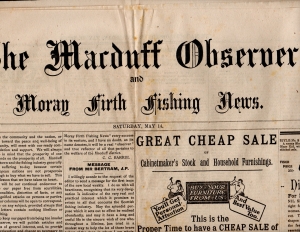 In 1921 Macduff got its own weekly newspaper, the Macduff Observer and Moray Firth Fishing News. It was only four pages, and the inside two were syndicated copy from down south. The local news was not all about fishing. One feature we would not have today was the “Macduff Visitors’ List”. The first list was on July 16th 1921, beginning with Broomlea on Buchan Road, where the Stuarts from Inverness were staying for a fortnight. The Bayview Temperance Hotel named folk from Huntly, Paisley, Glasgow, Crieff and Inverurie, and so on. Very often they give home addresses with street numbers. By the week after there were more than 66 visitors. Fifteen were locals from Aberdeen or Aberdeenshire, thirty from Glasgow or round about, but there were some from much further. There had already been a whole story about a Macduff lad made good in Australia, Alex Watt, who had brought his family to see his roots, and another family had come from Brazil.

The next week, 30 July, they started giving the Banff Visitors’ List as well. The Fife Arms Hotel had really posh people, even the Marquis of Headfort. For weeks the Hon. Mrs Dawson and her maid and the Hon. J.H. Bruce were staying at Bellevue. Also for weeks on end the Macduff UF Church had a Revd Professor Strahan from Londonderry taking the services.

The season continued into August with exciting visitors still arriving, Lady Ruthrie and son, Mr Wright from the American Embassy, and at the very end, 27th August, Macduff had five new arrivals from Pretoria and Bloemfontein in South Africa. We hope it was warm enough for them.

The paper’s editorial for September 3rd was headed ‘Au Revoir’ and stressed the need for a Macduff golf course. “Some had come expressly for a golfing holiday. They got it, but they had to go to Banff for it. What a pity! Have we not an ideal place for a nine-hole golf course on the Hill o’ Doune?”   Where did you say?