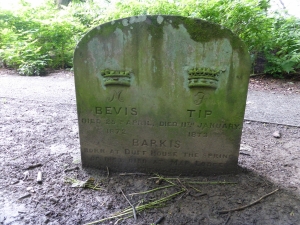 A name most people associate with the phrase “Barkis is willing” from the book “David Copperfield” by Charles Dickens (Barkis liked Peggotty and this was his phrase to show his romantic interest!). This popular book was first published in 1850 – and at the time, in residence in Duff House was the fifth Earl Fife, James Duff, and his wife Agnes. The fifth Earl is often depicted with dogs, showing one of his interests, but it seems he was also well read. One of his dogs was called “Bevis” – a name that first appeared in a 14th century romantic story, as the son of Count Guy of (South)Hampton and the daughter of the King of Scotland – presumably Robert the Bruce; a fictional story but one that has a sort of local reference as one of the other main characters is “Doon”, a name that sounds like the name of the village that preceded the town of Macduff.

The literary connections continue, because Bevis – the 5th Earl’s dog – had a pup, born at Duff House, and he was named “Barkis”. The character in David Copperfield, although of lowly occupation, is a “good” man, and perhaps the new pup was named after this recent literary character from the Charles Dickens book that had received much acclaim and no doubt talked about round many dinner tables. Barkis, the dog, was born in 1863, and it seems was much loved by both James and Agnes. Barkis is shown in an old photo, now on display in Duff House, at the passageway to Lady Agnes Boudoir on the first floor, sitting quietly by her rather voluminous skirts. The date of the photo is not fixed but must be between 1863 (when Barkis was born) and 1869 (when Lady Agnes died). It seems this family of dogs were Scottish Terriers, although perhaps not completely black based on the photo.

Bevis, and his mate, Tip, died in 1872 and 1873 respectively. Their pup, Barkis, lived until September 1875. He died at Mar Lodge (3miles west of Braemar), another of the Duff family estates, where the Earl Fife was on a shooting break.

Back at Duff House, a telegram arrived to the Head Gardener, asking him to meet a train at Banff Bridge station and collect a hamper. The Gardeners House was where the Co-op car park is today, and so the station wasn’t far away – just up the hill on the Macduff side of the bridge. The Gardener’s family were so excited, that the Earl had thought of them while he was away, and prepared for a grand meal from what they thought must be from the Earl’s shooting prowess. The hamper was placed on the kitchen table and duly opened. To find the Earl’s pet dog and precise instructions where to bury the body!

Hence the gravestone to all three dogs that can be seen in Wrack Woods today!

BPHSMOB When every visitor was news
Scroll to top