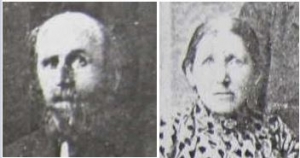 The Slater boys became record breakers in WW1 as all 9 of them were engaged in naval service. As was reported in the Aberdeen Weekly Journal 17 March 1916.

Sadly George and Margaret lost their youngest boy Joseph on 23rd May 1917.
Joseph Slater was born on 2nd July 1896, although his service record states he was born on 22nd August 1896. He was the 10th child of George Slater and Margaret Wood of 2 Commercial Street Macduff.
At the outbreak of WW1 Joseph was in the Royal Navy Reserve (RNR), service number 7621DA, on the fishing drifter ‘Coronaria’ (BF397)** as a deck hand.

Joseph drowned on 23 May 1917 while serving on HM Drifter ‘Coronaria’ at Scapa Flow Orkney. His body was not recovered for burial.
This was often the case for those serving at sea, but he is commemorated on the Portsmouth Naval Memorial.

Copyright 2019 by Mary Arnold QG
All rights reserved. No part of this publication may be reproduced or transmitted in any form or by any means, electronic or mechanical, including photocopy, recording or any information storage on retrieval system, without permission in writing from the copyright owner.