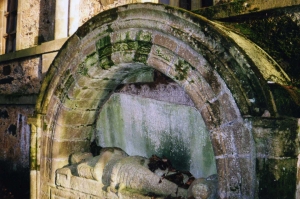 Ghosts walk for a reason. They cannot rest because they were wronged, and the wrong must be revenged. There was a former provost of Banff whose murderer was never found, and whose tomb was stolen from his grave. No wonder he could not rest in peace.

This was Provost Alexander Douglas, murdered in 1663. He was a doctor by profession. Douglas was also firmly on the side of the Covenanters. Some said he brought the Covenanting army under General Munro to Banff, where they utterly destroyed the Ogilvies’ mansion (Douglas and Ogilvie were at daggers drawn) and generally sacked the town. Out of sympathy (he could only afford sympathy) King Charles made George Ogilvie Lord Banff, though the Royalist army then sacked the town too. The Royalists lost the war, and during the 1640s Douglas was Provost of Banff and the town’s MP. In 1658 he put up the monument at the gate of St Mary’s Kirkyard, and probably had his tomb made ready in the old kirk. It was a very handsome traditional tomb, a knight in armour under an arch.

In 1660 times changed. King Charles II was restored, and Banff was no longer Covenanter-friendly. In October 1663 Sheriff Douglas (he still was Sheriff) was leaving the Court-house when he was stabbed by a man selling peat. The murderer leapt on the pony that had carried the peat, galloped up Strait Path, and was never caught. Perhaps the new authorities did not try very hard.

A century later the second Earl Fife was desperate to prove that his family were medieval knights in armour, not just bankers in Elgin. So one dark night his men carried away Dr Douglas’s tomb, and fitted it in behind the Fife Mausoleum. He covered up Douglas’s inscription. And then the ghost walked.  George Imlach, writing early in the 19th century, explaining some strange happenings around the Mausoleum, wrote “I made Lord Fife’s people believe the other day that the Provost’s ghost turned the vase [an urn full of monkish bones] into the river.”   So there is a ghost story already told 200 years ago. Do not visit the Mausoleum at night. 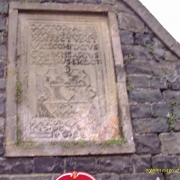