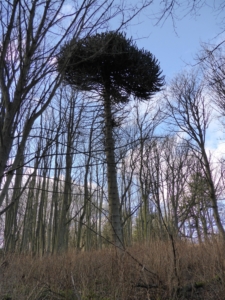 It is not a secret that in Banff Castle grounds there is Monkey Puzzle tree – the latin name being “Araucaria Araucana”,  The sign next to the tree advises it was presented by the Argentine Ambassador to commemorate the 100 year memorial of a gentleman called Jose de San Martin (died 17th Aug 1850).  It is a great looking tree and is doing well.  It is a fairly large tree but obviously not huge – it is only 70 years old or so.

There is a whole back story behind this however, and this good example of a Monkey Puzzle tree is however nowhere near the largest or oldest such tree in Banff.

The story really starts back in 1809.  James Duff, the eldest son of Alexander the 3rd Earl Fife of Duff House, had married Mary Manners 6 years previously, but she died on 20th December 1809.  That is a sad story in itself, as she died from a rabid dog bite.  James was bereft and in 1808 volunteered to fight with the Spaniards against Napoleon.  He served with great distinction and only returned to the UK in 1811 on the death of his father when he became the 4th Earl Fife.

During his time in Spain, one of his friends was another soldier called José de San Martin, born in Argentina, but who also fought against Napoleon before returning to South America.  James 4th Earl Fife assisted with his passage back to South America – from London –  and today José is a national hero of Argentina, for his leading role in achieving Argentine independence (and later other South American countries too).

José strengthened his friendship with James by visiting him at Duff House; some records say this was in 1824, others in 1833.  The relevance of this visit to the subject of Monkey Puzzle trees, is that in Wrack Woods is truly wonderful example of a Monkey Puzzle tree.  It is reported to be the 3rd highest Monkey Puzzle in the UK, and potentially the oldest.  At the time of José’s visit, it is known for certain that the Duff House Pleasure Grounds had an example of every tree known in the UK – and that “the trees are surprisingly grown, considering how near they are to the North Sea”; Duff House grounds competed with Princes Gardens in Edinburgh as the best garden in Scotland.  So it is quite conceivable that José, knowing of James pride in his grounds, brought him a tree from his native Argentina; just as the Argentine Ambassador did in 1950 planting it in Banff Castle.  We know from counting branch layers that the Duff House tree is at least 18th century – but to prove it’s age would mean a coring of the trunk.  To put such a magnificent tree at risk of disease would not seem prudent!

The Argentine link doesn’t quite end there either.  West of the Buenos Aires city centre is a park, called Plaza Ciudad de Banff – and still named that today – originally named because of José’s esteem for his friend in our very own towns.