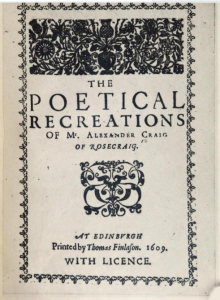 Towns are often proud of famous sons who never came back. But Alexander Craig made a name for himself against serious challenges and came back to live in Banff. His father William was a burgess of Banff and could afford to send his teenage son to St Andrew’s University. In everything Alexander wrote, you could see a sound grounding in the Greek and Latin classics. It got him some sort of hangers-on place at the royal court in Edinburgh, and so he went south to London with King James VI in 1603. He was a court poet, and that meant that too much of his poetry was flowery compliments to royalty. But a willingness to flatter is not enough. We should remember the strong local competition. England had great poets. Craig was an almost exact contemporary of William Shakespeare. And King James himself was a cultured man, who had even written a book on how to write poetry. Craig proved up to scratch. He was good at writing little poems, eight lines long, and for that you must be able to have a punchline at the end, and quite often he did.

So the royal pension Craig was granted in 1606 of 600 merks a year was not a silly whim. When he got it he went home to Banff, and became a leading light of the town. For years he was the town’s Commissioner to the Convention of Royal Burghs, and he became a bailie. On the quiet he was still writing poetry. His house was called Rosecraig, probably from his own name. We think he married twice, because his widow Isobell within a year was snatched up by Dr Douglas, later Provost Douglas, and was still alive in 1660. (You may remember that Provost Douglas was the one whose murderer was never found).  Craig’s grandson was a wastrel and sold off the Craig lands, so we know that the lands of Coldhome and Kingswells in the town had belonged to the poet. In 1723 16 chairs from Rosecraig went to furnish the Council Chamber, so it was a big house.

The old OS map shows Rosecraig as rocks on the shore just beside the pumping station towards the harbour. Surely it was higher up, at the top end of the Castle grounds.

James the bather
Scroll to top