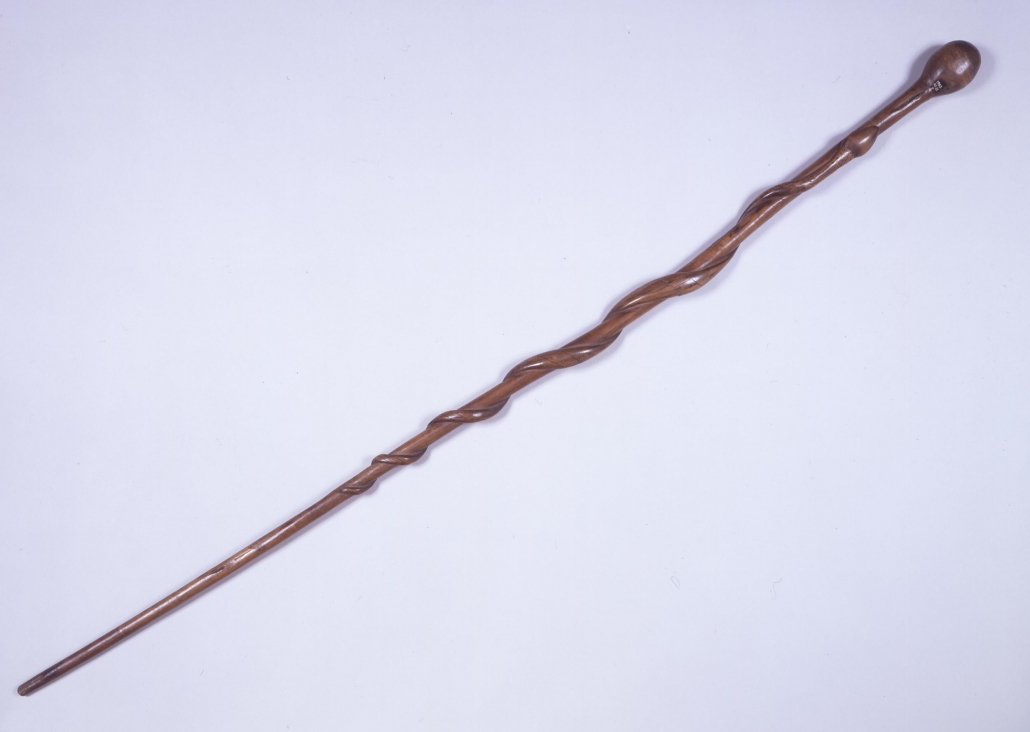 King Cetshwayo was the last Zulu King. At the time British people spelt the name Cetewayo, but nowadays it is more likely to be Cetshwayo, closer to the actual pronunciation. After a long and brave fight by the Zulu army, the King was captured after the battle of Ulundi in 1879 by Major Richard J.C. Marter of the Kings Dragoon Guards. Colonel Harford described the moment King Cetewayo gave himself up – “the King …strode in with the aid of his long stick, with a proud and dignified air and grace, looking a magnificent specimen of his race and every inch a warrior in his grand umutcha of leopard skin and tails, with lion’s teeth and claw charms round his neck”.

Was this the same stick which was taken from him? In 1882, Mr F.C. Lucy took a collection of these valuable items back to Britain after a trip to South Africa. The list was long and included Cetewayo’s stick, 13 throwing and stabbing assagais (light spears), 3 knobkerries (clubs), clothing with bead work, 2 Kaffir pipes and 2 Zulu pipes, as well as a number of natural history objects.

These were donated to the Banff Museum by Mr Lucy of London, via his mother-in-law Mrs Ewing, who lived in St Catherine Street. The walking stick is listed as being in the museum in 1919 (Banff and District by A. Edward Mahood). After this it is difficult to track what happened to Cetewayo’s stick until it turns up in the British Museum in 1963. It is there listed as being previously owned by Cetshwayo kaMpande, Banff Museum, and from the collection of Captain A.W.F. Fuller.

Captain Fuller was referred to as “an armchair anthropologist”. He was born in Sussex and trained as a solicitor but at the outbreak of the First World War he signed up with the Oxfordshire and Buckinghamshire Light Infantry and became a captain. He built up a vast collection and he refused to sell anything until shortly before his death when 6,800 items from the Pacific were sold to the Field Museum of Natural History in Chicago. The rest of his collection was dispersed by his widow. The clue as to how Cetewayo’s stick went from the Banff Museum to Captain Fuller comes from newspaper articles which state that in 1938, the then town council, brought in Mr Kerr of the Royal Scottish Museum to assess their collection and he recommended that a large number of items from the museum should be disposed of as they were not local to Banff. Could it be that Cetewayo’s stick was sold then? 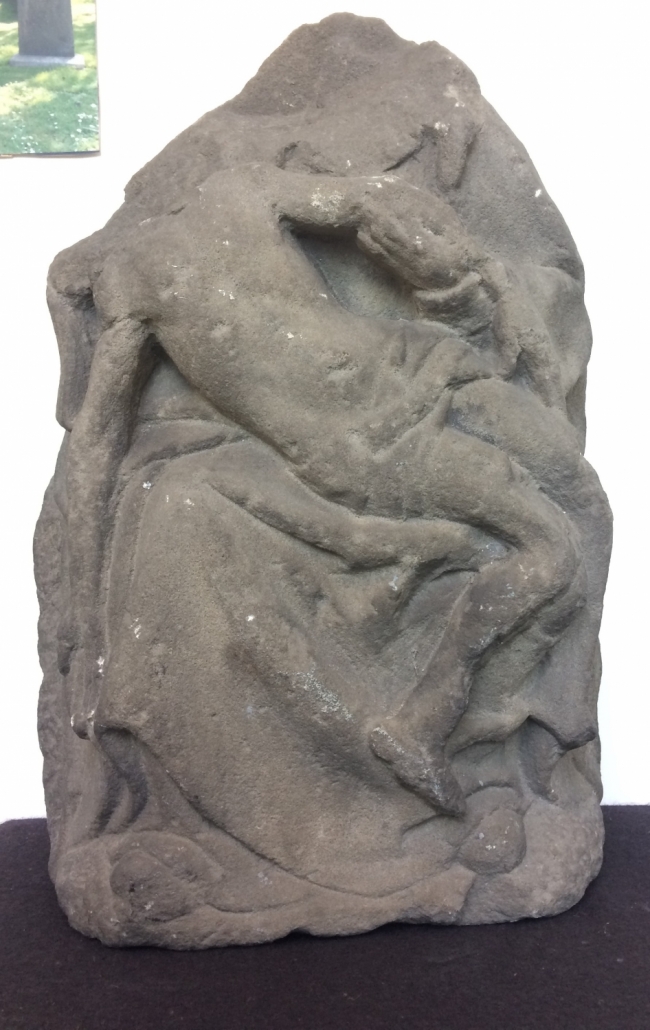 In 1862 John Kynoch was digging a grave in the old St Mary’s kirkyard in Banff, then still in use. He hit stone and was, he said, “compelled to use the pick in place of the spade”. Then he realised he had uncovered part of a statue. The pick had done serious damage in the process. Not being an archaeologist, he did not gather up the bits broken off. He took his find to the manse, where it stayed for a time, but then was put back in the kirkyard as an attraction for visitors. Twenty years later, there was a gathering of the northern Scientific Societies at Banff, and they were shown Mr Kynoch’s find. The learned minister of Nairn, Dr Grigor, said ‘That is a late-mediaeval Pieta”. The Catholic priest at Banff, Fr Chisholm, later a bishop, contradicted him, because the Middle Ages are Catholic, not Presbyterian, territory. It was too small to be a Pieta. He thought it might be part of a set of Stations of the Cross, the one that shows Christ being taken down from the cross after the crucifixion. Perhaps you could have a version of the thirteenth station showing him being lifted down and placed on his mother’s lap.

The statue was taken to Edinburgh and showed to scholars there, and Dr Grigor brought a picture of Michelangelo’s Pieta in Rome to the next meeting of the Banffshire Field Club, and it was agreed that what Banff had was a Pieta. It is likely that the word Pieta was a new one to Banffshire. Now classified and recognised as an amazing local survival of medieval art, the Pieta was at once moved to Banff Museum in 1883, and it has been there ever since. There is little doubt that it is local. A stonemason could tell you this is old red sandstone, common along this coast, and still quarried in Morayshire. (Incidentally old red sandstone can be yellow too.) Some say that the fact that the heads are missing is evidence of deliberate iconoclasm at the Reformation, but Banff quite liked images of Our Lady, and across the room in the Museum is the original Mercat Cross, with a statue of the Virgin and Child which survived in a public place throughout the Reformation and on. It is sadly possible that a man with a pick will knock off bits that stick out before he realises he has found a statue.

In a way, Michelangelo’s masterpiece has been a nuisance in interpreting what we have got in Banff, as if the sculptor in Banff must have had it as his model. On the continent there were hundreds of Pietas going back 200 years before Michelangelo, most common in Germany, but in France and Italy as well. No other Pietas, or indeed Stations of the Cross, have emerged from mediaeval Scotland. It is actually a problem to make one that looks right. A mother with a baby is easy, but a woman with the corpse of a full-grown man looks not just tragic but somewhat grotesque. So earlier Pietas often do not achieve what Michelangelo managed. Measured against them our Banff sculptor did all right.

Presumably it stood in the parish church, or perhaps in the Carmelite church, now lost.